Well, my new book (third book, but second monograph) is due to appear in the new year from Palgrave Macmillan. It is titled Celtic Myth in Contemporary Children’s Fantasy: Idealization, Identity, Ideology and it explores the creative uses of ‘Celtic’ myth (mainly focusing on Irish and Welsh medieval texts) in modern fantasy for children and young adults. Chronologically I begin from the 1960s, with novels such as Alan Garner’s The Owl Service (1967), and end with very recent examples, including Kate Thompson’s The New Policeman (2005), and Catherine Fisher’s Darkhenge (2005).

But the chapters of my book are thematic, rather than chronological, looking at the Irish ‘mythological’ cycle, the Táin, and the Fenian tradition, before turning to the Mabinogion, the Welsh Triads and the “Arthur of the Welsh”. Today’s entry is the beginning of a series of blog posts on motifs, ideas and research tit-bits that didn’t make it into the book, alongside some introductory material on my selected authors, some of whom my readers will know well, while others they may want to find out more about. 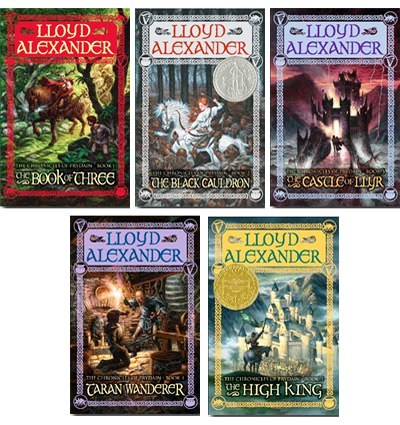 And I begin with American fantasist Lloyd Alexander (1924-2007), whose Chronicles of Prydain won critical acclaim and became a classic series of American children’s fantasy. The Book of Three (1964), The Black Cauldron (1965), The Castle of Llyr (1966), Taran Wanderer (1967) and The High King (1968) were later supplemented by The Foundling and Other Tales of Prydain (1973) a collection of short tales that provide “back-stories” of the characters and events in the main series. 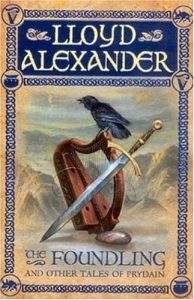 That Prydain is based on Wales, not only in terms of its geography and nomenclature, but also in terms of its mythology and storylines, is no secret: Lloyd Alexander was fascinated by the Mabinogion, enhanced by his posting to Wales during WWII. He spoke admiringly about Wales and Welsh legend in numerous articles and interviews, and was equally fascinated by Lady Charlottes Guest’s notes, as with her 19th-century translation of the Mabinogion.

Although Lloyd Alexander is often included in children’s literature courses (more so in the USA) and his fantasy world of Prydain has attracted its fair share of scholarship, I wouldn’t be surprised if there is a fresh wave of research into his work in the next few years, especially as there are murmurs about a possible new film adaptation of the Chronicles (Disney’s 1985 film The Black Cauldron was a pretty loose adaptation of The Book of Three and The Black Cauldron, the first two fantasy novels in the Chronicles). I have, therefore, put together my version of a “beginner’s guide” to researching Lloyd Alexander, with a focus on Prydain.

To begin at the beginning, every good research project on Lloyd Alexander needs to understand the author, his time, his childhood experiences and growing up process, the circumstances that led him to writing for children (which wasn’t at all what he had originally intended) and the complexities of his engagement with Welsh legend. 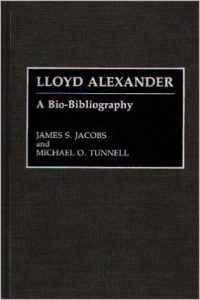 The former is the more recent book, made up of a brief biography of Alexander (37 pages) and devoting the bulk of its contents to an extensive bibliography of Alexander’s own works and to works of criticism on Alexander’s fiction. The biography we get in this book takes us to the 1990s, but Jacobs’s 1978 dissertation, despite stopping at an earlier point, is the superior biographical study, offering over 300 pages of double-spaced typed pages on Alexander’s childhood, formative years, first literary endeavours and road to success as a children’s fantasist. On the other hand, the bibliography in the Jacobs and Tunnell book is superior to the one that appears in Jacobs’s dissertation, mainly because of the systematic listing of secondary sources on Alexander’s work. 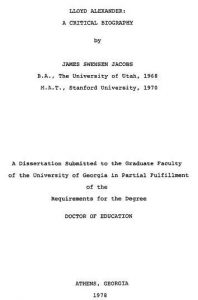 The two books, therefore, complement each other really well. The 1978 dissertation will tell you about Alexander’s “eat and read” programme (this is such a good idea I ought to do a separate blog post on it!), about his struggle to find his calling, about his war experience, and his involvement with translating into English some of the works of giants of the Parisian high-brow literary scene of the 1950s and 1960s (such as Paul Éluard and Jean-Paul Sartre). It will take you through his first, abortive, effort to write an “enormous  novel of social realism” along the lines of Balzac, and his eventual acceptance of writing as a craft, which became exciting again when he struck upon the idea of Time Cat, a book about a cat who time-travels to live his “nine lives”, taking his boy-owner along for the journey. It chronicles the birth of the idea of the Chronicles of Prydain in minute detail, with appendices that include Alexander’s first written proposal for the series to his publishers (plus his outlines for each volume), as well as correspondence with his editor over many years, Anne Durell. The 1991 book, on the other hand, will give you a much wider picture of Alexander’s entire oeuvre (he remained a prolific writer throughout his life, though the Chronicles of Prydain remain his most popular series of books) and will get you started on what has already been done/said/argued about his creative work (at least up to the 1990s).

Another gentle way to begin this journey of researching Alexander’s biographical background, is to watch Jared Crossley’s documentary Lloyd Alexander (2015), now available online, which features both Jacobs and Tunnell, and includes – of course – extensive footage of Lloyd Alexander himself.

The next absolutely indispensable resource on Alexander’s Prydain, is Michael O. Tunnell’s The Prydain Companion: A Reference Guide to Lloyd Alexander’s Prydain Chronicles (Henry Holt and Co., first published in 1989, revised in 2003). This is a comprehensive glossary/dictionary of every single character, place-name, object, or motif, in the entire Chronicles, including The Foundling and Other Tales of Prydain. 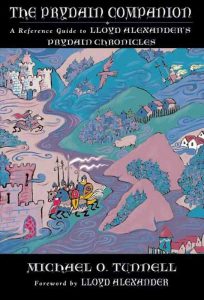 Tunnell takes us through the secondary world ‘infrastructures’ Alexander invented for his Prydain, from Achren (the female villain of the series) to Ystrad (the river that runs through Prydain), reminding us of plotlines, genealogies, obscure references, places and peoples. In many entries he quotes liberally from Alexander’s letters, essays, and also from the private interviews he had with the author. In addition, he also references Alexander’s Welsh sources, citing Lady Guest’s translation of the Mabinogion, Robert Graves’s The White Goddess, and even Edward ‘Celtic’ Davies’s Mythology and Rites of British Druids, where appropriate. This is, therefore, a doubly useful book for anyone researching Prydain, not just a quick reference for any of the countless names one may need a reminder about, but also as a first introduction to the kind of Welsh sources Alexander used, and they ways he engaged with them. Chapter 4 of my book, “Lloyd Alexander’s The Chronicles of Prydain: Building Fantasy upon Forgery”, problematizes these sources and focuses on the constructedness of ‘Celticity’ in Alexander’s work, but Tunnell’s book is still a great place to start.

I am not going to attempt an exhaustive bibliography of “main” critical work on Prydain, but I am offering you below a list of books (specifying chapters) and journal articles that were very useful when researching my own chapter on Alexander’s use of ‘Celtic’, especially Welsh, medieval literature and legend:

Filmer-Davies, Kath (1996) Fantasy Fiction and Welsh Myth: Tales of Belonging. Basingstoke: MacMillan. [See Chapter 5: “The Place of the Pig-Keeper: To Know Oneself”]

I am hoping that Chapter 4 of my forthcoming monograph will be a worthy addition to this list (especially as it takes issue with some of these sources too!).

From this point on, I am adding a few more resources that cannot really be claimed to be in the “beginners” category. One is most definitely “advanced”, while the other is within the realm of reception and adaptation. But they are both worth knowing about!

Being a scholar who has enjoyed archival research (working with J.R.R. Tolkien’s manuscripts, primarily) and have found it very fruitful, I went looking for Alexander’s papers, and was very pleased to find out that they are in a public institution and accessible to scholars and researchers. For those lucky people who can easily travel to the Free Library of Philadelphia, Alexander’s papers are now held there as part of their Children’s Literature Research Collection. Here’s a link to the collection inventory. I visited this archive only vicariously, through my brilliant research assistant, Katherine Sas, and was very lucky to read the very first draft of The Book of Three, and explore other bits and pieces. Some of Lloyd Alexander’s handwritten notes and drawings are available online via the collection’s website, such as this map of Prydain (which will be reproduced in my book) and this delightful and whimsical letter by Alexander to his editor’s cat!

Last but not least, I have been following (and found a pleasure to watch unfolding) a fan adaptation of the first book of the Chronicles, The Book of Three, as a graphic novel. The artist, Dawn Davidson, has been gradually retelling the story of Taran, Gwydion, Eilonwy, and all of other beloved characters from the opening volume of the Prydain saga. She has just reached the point in which Taran and Eilonwy find the enchanted sword Dyrnwyn in the secret passages beneath Spiral Castle. You can follow her on Facebook too, where she posts each new page as soon as it’s done. 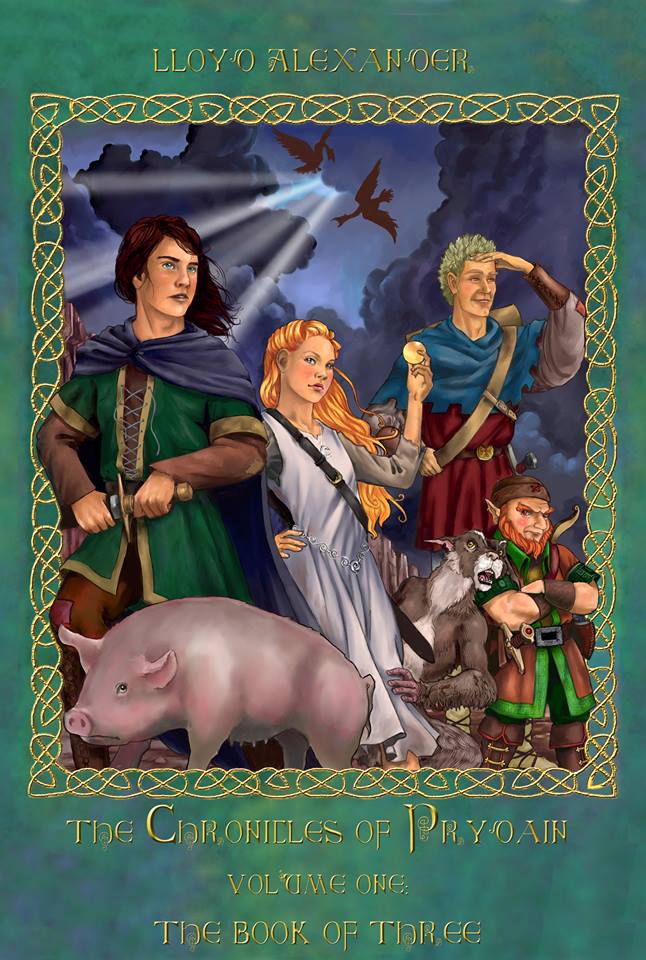 *Jacobs’s dissertation should be accessible via Inter-Library Loan or via ProQuest.