* This is the original first draft of my review of the film Tolkien (2019), directed by Dome Karukoski, for the TLS. The version published is slightly shorter, and with a different title – link here. 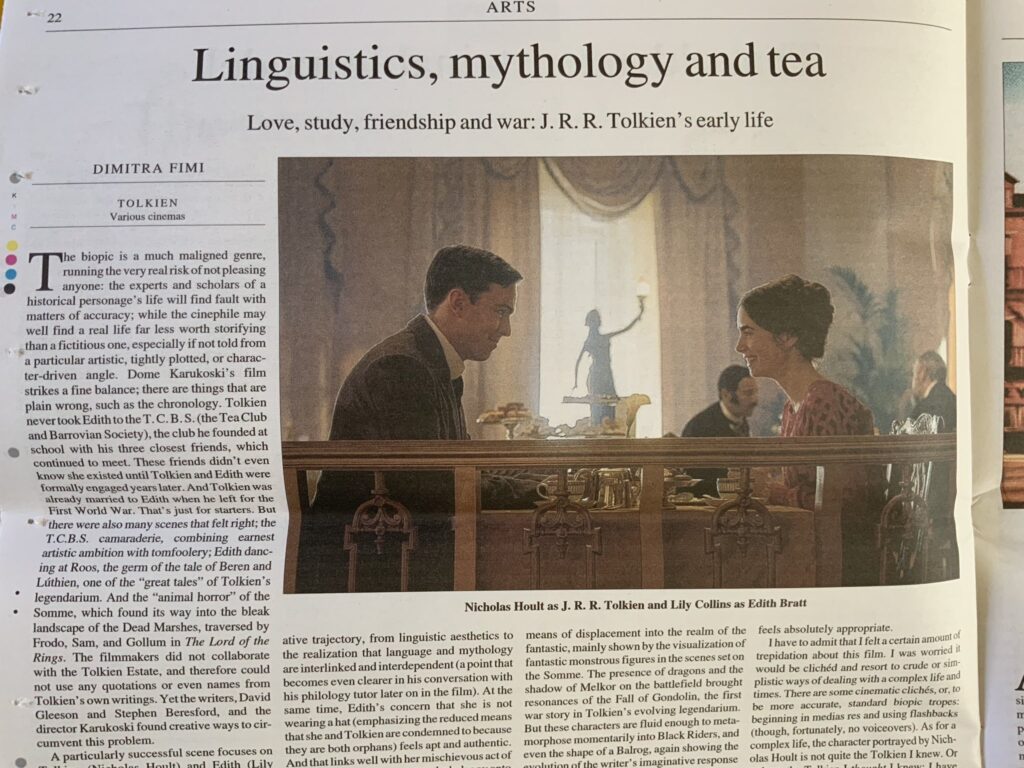 Tolkien: Knowing it’s so wrong, but feeling so right

What’s in a name, and what’s in a genre name? I went into the cinema thinking about two words: “Tolkien” and “biopic”. The former, the name of the author who has been the main focus of my academic career so far. The latter, a term bringing together film and biography, implying a marriage of fact and fiction. I found myself in split personality mode while watching the film. There were moments when I poked my poor husband next to me and whispered: “this isn’t right!”. And yet, there were moments when I was entertained, and charmed, and even moved to tears. In this review I am similarly attempting to navigate the meanders of accuracy, invention, fact, fiction, creative license, and truth.

The biopic is often a much maligned genre, running the very real risk of not pleasing anyone: the experts and scholars of a historical personality’s life will always find fault with matters of accuracy; while the cinephile may well find a real life far less worth storifying than a fictitious one, especially if not told from a particular artistic, tightly-plotted, or character-driven angle. Biopics are hybrids. They need to succeed as biographical stories (if they can get you interested in finding out more about a historical personality’s life, that’s an important achievement). But they also need to succeed as cinematic stories (you should empathize with characters, feel invested in their trials and tribulations, feel strongly about, or critical of, their actions). I think Dome Karukoski’s film managed to strike a fine balance between the two. Yes, there were things that were plain wrong, such as the chronology of events. Ronald never brought Edith to the T.C.B.S. meetings in Birmingham. His three closest friends didn’t actually even know she existed until Tolkien and Edith were formally engaged years later. And Tolkien was already married to Edith when he left for the War. That’s just for starters. But there were also so many scenes that felt just right. The T.C.B.S. camaraderie, combining earnest artistic ambition but also tomfoolery. Edith dancing at Roos, the germ of the tale of Beren and Lúthien, one of the “great tales” of Tolkien’s legendarium. And the ‘animal horror’ of the Somme, which found its way in the bleak landscape of the Dead Marshes, traversed by Frodo, Sam, and Gollum in The Lord of the Rings. The balance between striking the right chord in terms of biographical detail, and getting the characterization and the tone of emotional truth right is all the more remarkable for a film that did not collaborate with the Tolkien Estate, and therefore could not use any quotations or even names from Tolkien’s own writings. Yet the writers and director found creative ways to circumvent this problem.

Let me pause at a particularly successful scene, part of which was released as a teaser clip before the film’s launch. That’s the scene with Tolkien and Edith in the tea rooms, in which they talk about language, sounds, and storytelling. At the beginning of the sequence, when their hands join, Tolkien is making up an impromptu story about entwined trees that grow and love together, which is a very deliberate play (event to the point of word choice) on Tolkien’s early love poem:

Lo! Young we are and yet have stood
like planted hearts in the great Sun
of Love so long (as two fair trees
in woodland or in open dale
stand utterly entwined and breathe
the airs and suck the very light
together) that we have become
as one, deep rooted in the soil
of Life and tangled in the sweet growth.

The poem is never quoted, but to the Tolkien fan and scholar, it’s there, very much evoked and celebrated. Then, the focus on the phrase “cellar door” is also a clever way of making a point about Tolkien’s idea on the beauty of language sounds, without exclusively quoting Tolkien (the argument that “cellar door” is particularly euphonic had been made before). In addition, Edith’s claim that language must mean something, moves the film a step forward in Tolkien’s creative trajectory, from linguistic aesthetic, to the realization that language and mythology are interlinked and interdependent (a point that becomes even clearer in Tolkien’s conversation with his philology tutor later on in the film). At the same time, Edith’s concern that she is not wearing a hat (emphasizing the reduced means that she and Tolkien are condemned to because they are both orphans) feels right and authentic. And that links well with Edith’s mischievous act of throwing a lump of sugar on the hat of a better-off lady sitting at a lower part of the tea rooms, over a balcony. This slightly modifies (but to great effect) a similar incident in Tolkien’s official biography by H. Carpenter: Ronald and Edith frequenting tea rooms with balconies overlooking the pavement and throwing sugar-lumps onto the hats of passers-by. They are young, indeed, and in need of affection, but also of little irreverent acts of bonding.

In my view, there was one fundamental thing that didn’t quite come through: Tolkien’s Catholic faith. This could have been rectified by at least an allusion to his mother’s devotion in the opening scenes (she converted to Catholicism, which led to her family’s deprivation, as her relatives withdrew financial support), as well as at least some occasional glimpses of Tolkien’s own strong sense of religious practice (which was as much emotionally associated with his dead mother, as to a more spiritual understanding of the world). But the other four main threads that the film focused on were indeed key for the shaping of Tolkien’s creative writing: the T.C.B.S., the love story between Ronald and Edith, the Great War, and the emphasis of Tolkien’s immersion into languages (both real and invented). As hinted above, telling the story of the trajectory of Tolkien’s creativity was well-served by these four threads. The film did a good job of showing Tolkien’s gradual intellectual grasp of how language and mythology can’t be separated, and of working through trauma through displacement into the realm of the fantastic. The latter was mainly shown by the visualization of fantastic monstrous figures in the Somme scenes. The presence of dragons and the shadow of Melkor in the WWI battlefield (the latter seemed to me clearly influenced by John Howe’s portrayals) brought resonances of the Fall of Gondolin, the first war story in Tolkien’s evolving legendarium. But these characters were fluid enough to also metamorphose momentarily into Black Riders, and even the shape of a Balrog, again showing the evolution of Tolkien’s imaginative response to his times.

Other lovely touches were the inclusion of Joseph Wright in the storyline, with his Yorkshire accent well-realized on the screen by Derek Jacobi; and the story read by Tolkien’s mother by the firelight: the story of Sigurd from Andrew Lang’s Red Fairy Book, which Tolkien loved as a child. The choice of “Sam” as the name for Tolkien’s batman was appropriate, and a deliberate echo of Tolkien’s own words in his letters: “My ‘Samwise’ is indeed… largely a reflexion of the English soldier… the memory of the privates and my batmen that I knew in the 1914 War, and recognized as so far superior to myself”. And the moment that was for me the most authentic, but also perhaps the most moving, was the inclusion of G.B. Smith’s last letter to Tolkien, quoted almost verbatim: “May God bless you, my dear John Ronald, and may you say the things I have tried to say long after I am not there to say them, if such is my lot”. Ending the film with Tolkien’s efforts to get Smith’s poems published and closing with the opening line of The Hobbit was spot-on.

I have to admit that I walked into the cinema with a certain amount of trepidation. I was worried about clichés and about crude ways of dealing with a complex life and times. Yes, there were some clichés, or, to be more accurate, some standard biopic tropes: beginning in medias res and using flashbacks (though, fortunately, no voiceovers!). As for a complex life, the character portrayed by Nicholas Hoult was not quite the Tolkien I knew. Or at least the Tolkien I thought I knew: yes, I have researched his writings, and even co-edited some of his manuscripts, but can one really know someone from their works and biographies? I suspect this is not the Tolkien that most scholars and fans think they know either. And he probably isn’t the Tolkien his surviving children or grandchildren will recognize (and in that context, I do understand the Tolkien Estate’s desire to distance itself from the film). But that’s not the job of a biopic. A biopic can only offer a fictional and fractional representation. It can attempt to tell the story of an extraordinary life. And, perhaps, to show how life and literary achievement may be interwoven. And in this, I think Dome Karukoski’s film has largely succeeded. It has opened the door for many more potential readers and viewers to appreciate Tolkien as a writer of his time, shaped as much by his life experiences and historical context, as by the literary tradition he knew so well as a scholar. And, importantly for me, it has got many emotional truths right. The fellowship of the T.C.B.S. The young love of Ronald and Edith. The pain of multiple losses. The horror of war. To sum up, I will resort, if I may, to paraphrasing Ursula Le Guin’s words, though she used them to describe fantasy literature: Dome Karukoski’s Tolkien wasn’t quite factual, but it was, in many ways, true.

One thought on “Tolkien: Knowing it’s so wrong, but feeling so right (my review of Dome Karukoski’s biopic)”