A couple of weeks ago, I posted a tweet which ended up developing into a snap poll with over 450 responses. The question? Here it goes:

Please help me with a quick experiment to inform a discussion with our #Fantasy PhD students tomorrow: if I asked you to name the 3 best Fantasy authors of all time EXCLUDING #Tolkien, who would you list?@TolkienSociety @FanLit @UofGFantasy @FantasyArtStudi @BritFantasySoc pic.twitter.com/mXNAV8Gju7

As most of you know, I am Lecturer in Fantasy and Children’s Literature at the University of Glasgow, where I work alongside three other colleagues who research and teach on fantasy: Dr Rob Maslen, Dr Matt Sangster, and Dr Rhys Williams. At Glasgow we also have the world’s only Masters in Fantasy, and an amazing community of approximately 30 PhD students working on various aspects of fantasy literature and culture. In normal times, we meet our PhD students as a group once a month (over lunch), to discuss work in progress, go through a forthcoming paper, share and discuss a piece of scholarship, etc. As soon as the COVID19 crisis forced the University into lockdown, we moved these meetings online and made them more frequent (once every two weeks) to maintain as much as possible a sense of community in a time of isolation.

In these online meetings we often assign a particular essay/journal article/book extract to discuss. A few weeks ago, the assigned reading was Patrick Moran’s recent The Canons of Fantasy (Cambridge University Press). I had all sorts of issues with this book (no space or time to discuss those now) but one particular extract just struck me as particularly provocative:

The canon of fantasy has a Tolkien-shaped problem. In the eyes of the general public, the Oxford don embodies the genre; he is often the only fantasy author that people know. The popularity of Peter Jackson’s films has only heightened this hegemony: no other adaptation of a fantasy work has reached such a wide audience. Of course, fantasy fans can name dozens of other authors who feel as important to them as Tolkien, maybe more so, be it Ursula K. Le Guin, Robert E. Howard, T. H. White, Michael Moorcock, George R. R. Martin, Guy Gavriel Kay, Robin Hobb, Tolkien’s friend C. S. Lewis and many others. But ask three fantasy fans who is the greatest fantasy writer besides Tolkien, and chances are they will give three different names. (p. 25)

Now, this sounded like a challenge to me. I will leave aside the question of whether Tolkien would actually top all the polls currently on who is the best(-known) fantasy author (again, that’s a discussion for another day and post). What really didn’t quite ring true for me was the suggestion that no clear “top” fantasy authors (apart from Tolkien) would naturally arise. My first instinctual response was that – whomever I could imagine I may have asked – Ursula K. Le Guin would come at the top. I was just absolutely certain about that, and willing to put my neck out.

This hopefully explains my Twitter question above, especially the request for three authors and no more (and I know this made it very hard for some people). What I think I had hoped for was perhaps 40-50 responses, and my hypothesis was that at least a couple of fantasy authors would come top at a good distance from others, disproving the statement above (and I was definitely expecting Le Guin to be the top one). So I just released my question to the Twittersphere, and – as per above – I just ended up doing nothing for about 24 hours other than recording and counting (and double-counting!) the responses I got (yes, 450 is a lot more than 50!)!!! And here are the results:

So, let’s have a look at the pie chart (which also includes the top 20 fantasy authors respondents voted for) more closely: 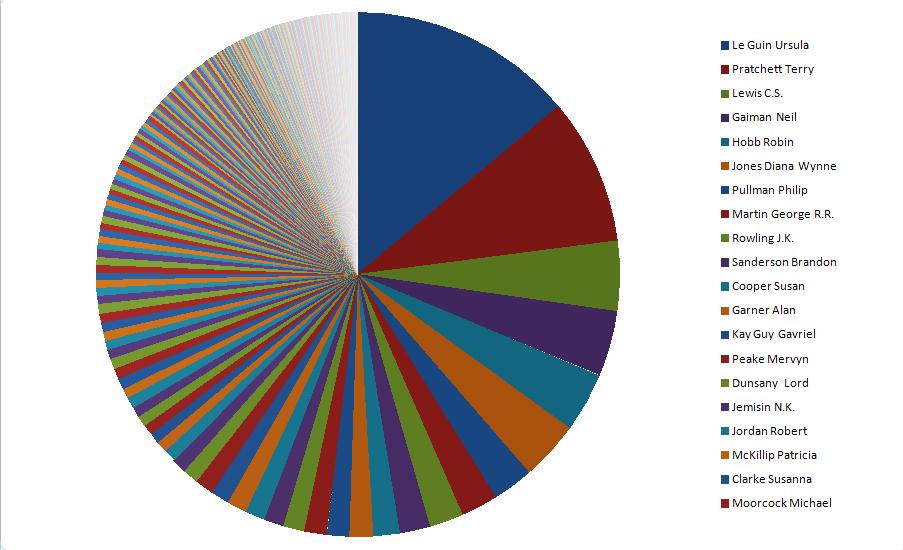 I am also giving below a table with the top 30 fantasy authors as voted by my respondents (actually 33, as there were many ties):

Now, a few caveats: this was a snap poll and not a properly-designed academic survey. I have no data on the demographics of my respondents (I could, perhaps, work out locations from Twitter handles, though this isn’t always reliable, but I can say nothing about age, gender, etc.) At the same time, there was a strong self-selection bias: the Tweet was posted on my personal profile and was naturally first seen by my followers, and also by the followers of the accounts I tagged (@TolkienSociety, @FanLit, @UofGFantasy, @FantasyArtStudi and @BritFantasySoc). The original post was re-tweeted a lot (Twitter Analytics said that it has 54,527 impressions and 3,366 total engagements) but still, the Twittersphere is a limited pool with its own demographic preferences.

Still, I think the results I got from this small sample were really interesting and at least worth thinking about. A few points that seem important to me:

Last but not least, it was wonderful to see some important fantasy authors, artists, and editors, add their response to my snap poll. Here are a few responses that I think I, at least, would like to take note of:

I’m going to go with living authors as an act of support & encouragement for all creative souls who fear they must be dead before they’ll matter. So I choose Frances Hardinge, Juliet Marillier & Naomi Novik!