I give you below two images:

The first one is by Mervyn Peake. It’s his illustration of the nursery rhyme “Little Jack Horner”, from the book Ride a cock-horse and other nursery rhymes (British Library Publishing). Peake’s Little Jack Horner is most certainly sitting in a corner, accentuated by the light of the candle which only illuminates the bit of the floor where he sits (complete with mouse!) and the fantastic wallpaper where the two walls meet immediately around him. There’s a framed drawing/painting on one of the walls, mostly in a non-lit spot, and Jack’s rather naughty-looking face is all the money. The wallpaper features different shades of pink and pastel green and yellow colours. We can see patterns which include a lighthouse, fish, a seagull, flowers, a star. 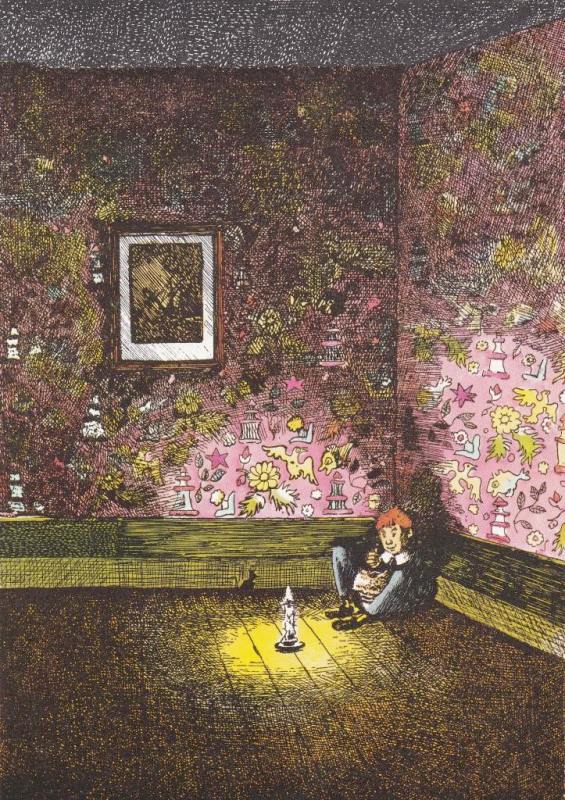 So far, so good, you may say. What’s all the fuss about? Well, a few weeks ago I was having a look at Peake’s illustrated book of nursery rhymes (borrowed from my esteemed colleague Dr Rob Maslen) when I stumbled on this picture, and I immediately thought: “I know this! I’ve seen it before!”

Of course I had! I have been teaching picturebooks to undergraduate students for a good few years now, often using Anthony Browne‘s many excellent picturebooks as main texts. What I recognized in Peake’s illustration was – clearly – an hommage by Browne in his award-winning picturebook Gorilla.

So here’s my second image: 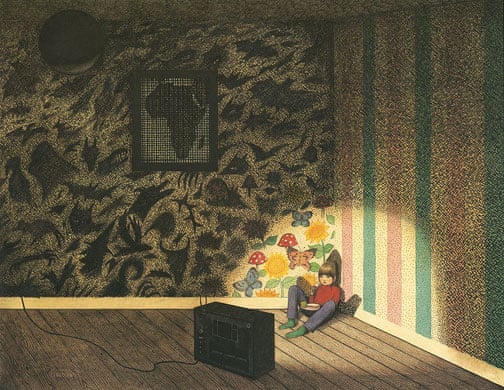 The story this picturebook tells is that of young Hannah, who wants her dad to spend time with her. She gets a toy gorilla for her birthday, who becomes a real-life gorilla at night, wears her father’s coat, and takes her out to see and do all the things her dad hasn’t had time to see and do with her: going to the cinema, visiting the zoo, having a meal in a café, etc. This particular image can be found towards the opening of the picturebook, which explores Hannah’s loneliness and isolation: instead of a candle, Hannah is sitting in a corner in front of a TV, which illuminates the floor and two meeting walls in exactly the same way as Peake’s illustration. Instead of sneakily eating plum pie, Hannah is having a lonely dinner (she’s holding a plate with a sandwich and an apple), once again without her dad. The wallpaper uses very similar pastel colours as Peake’s one: pink is clearly a deliberate choice here. But in the non-lit spots, it features instead rather scary creatures of the night, as well as the silhouette of a gorilla. Is the father-shaped gorilla (still to appear in the story) prefigured here as part of her dreams? He is definitely prefigured in the framed painting, which in this image shows pretty clearly a map of Africa.

Anthony Browne is a master of appropriating and adapting previous art and inserting it in picturebooks (see, for example, his website gallery). But I didn’t know this particular loan/adaptation until now. Actually, I’d rather not call it a loan or an adaptation, but a visual dialogue – Browne succeeds in both evoking Peake’s illustration, and doing something new, interesting, and appropriate to his particular text with it. I am looking forward to discovering more visual dialogues like this one! If you know of any more, please do add a comment!