The BBC Genome Project has been uploading on its site listings information which the BBC printed in Radio Times between 1923 and 2009. I’ve been meaning to have a little look there for Tolkien-related items for a while. There are many (315 entries) but I was particularly interested in programmes in which Tolkien himself participated in some way. I didn’t expect to find anything brand new – Tolkien scholarship has recorded and discussed Tolkien’s BBC interviews and other contributions for many years now. But there were still interesting finds! The earliest two of the Tolkien-related programmes found in this database are from the 1930s, and for this decade the Genome Project includes digitized files of the actual pages in the Radio Times with that particular day’s listings. So here we go:

This was a broadcast of parts of Tolkien’s translation of the Middle English poem ‘Pearl’, described in the Radio Times as “perhaps the loveliest of all old English poems”, a lament of a distraught father for his little daughter, complete with elements of dream vision and medieval allegory. The BBC Radio Times listing notes that:

This poem has been modernised by J. R. R. Tolkien in such a way that it keeps all the delicacy and atmosphere of the original mediaeval poem.

At some point in or around early 1936 Tolkien had offered his translation of this poem to the London publisher J.M. Dent for publication but was rejected. However, Guy Pocock, who joined the BBC in 1936, saw it and recommended that the translation would make a good radio programme (see Tolkien Chronology, pp. 193, 199). Tolkien’s translation of “Pearl” wasn’t published until 1975, two years posthumously, together with his translations of Sir Gawain and the Greek Knight and Sir Orfeo.

What I find fascinating is perusing the programmes preceding Tolkien’s ‘Pearl’ – one can imagine Tolkien tuning in to hear his own translation being read out, and perhaps catching some of the programming around it. That particular Friday, the programme earlier that evening included a recording of a speech by Lord Baden Powell, the founder of the Scout Movement, from what is described as the “International Boy Scouts’ Jamboree”, which, however, must be the Northern Counties Jamboree, at Raby Castle, near Staindrop, County Durham. I speculated in my 2008 monograph that Tolkien was at least familiar with scouting principles and learning, but we now know that he and his brother, Hillary, were definitely involved in the movement, having started three patrols of scouts at the Birmingham Oratory. I wonder whether Tolkien would have listened to Lord Baden Powell’s speech that evening, while waiting to listen to the broadcast of his translation of ‘Pearl’! 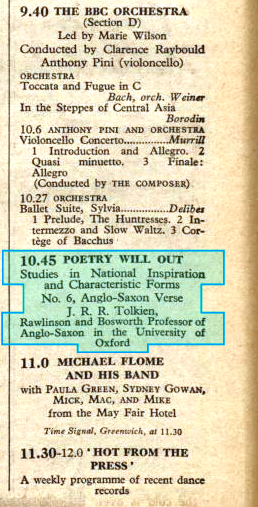 Following Tolkien’s seminal 1936 lecture “Beowulf: The Monsters and the Critics”, C.V. Salmon of the BBC wrote to Tolkien to discuss the possibility of “a broadcast on Beowulf with a reading in the original Old English” (Tolkien Chronology, p. 220). This led to a very short talk which was broadcast on 14 January 1938, as part of a series of short programmes titled “Poetry Will Out”, subtitled: “Studies in National Inspiration and Characteristic Forms” (Radio Times, 14 Jan 1938). Later Tolkien enlarged this talk, parts of which Christopher Tolkien edited and published as an Appendix to The Fall of Arthur (2013), under the title “Old English Verse”.

Once more, the context of this short broadcast is interesting. The Genome Project lists 6 programmes in the “Poetry Will Out” series, with a clear aim:

The idea of this series is that poetry is to be found in the hearts of all peoples, although among different peoples it takes different forms. Some of these forms-the French sonnet, Scandinavian sagas, Italian epics, and so forth – are traced in this series.

Tolkien’s actually was the 6th and last broadcast of the series. Here is the full list of subjects and contributors, all by University Professors, one of whom was Tolkien’s close collaborator and friend, E.V. Gordon:

Let’s hope that the Genome Project will continue to digitize old Radio Times issues – let’s see what else we can discover about Tolkien’s BBC links!

By Dimitra Fimi | 3rd January 2019 | The Fall of Arthur, Tolkien, Uncategorized | No Comments |