I am now back from Leeds, after an excellent Tolkien Society Seminar, and an outstanding series of papers and a roundtable discussion on Tolkien at the International Medieval Congress 2018. Here’s a quick overview of all papers presented at the IMC, mostly based on my live-tweeting during the sessions. Just to warn you that my reporting of the papers is uneven at best, and doesn’t always reflect the richness and depth of each individual presentation. The number of tweets I could do was often limited by the fact that I was also chairing/moderating a number of these sessions, so I have done the best I could under the circumstances! At least readers will get a flavour of the scope and range of topics covered. I also should say that all the Tolkien sessions were very well attended, often to the point of having people standing or sitting on the floor! After the midpoint, the IMC very kindly started moving us to bigger rooms!

World-Building and Memory in The Name-List to the ‘Fall of Gondolin’
Andrew Higgins, Independent Scholar, Brighton

Memory in Tolkien’s Medievalism I: @asthiggins on “World-Building and Memory in The Name-List to the ‘Fall of Gondolin’” @IMC_Leeds #IMC2018 pic.twitter.com/gvrlriRaE0

‘Forgot even the stones’: Stone Monuments and Imperfect Cultural and Personal Memories in The Lord of the Rings
Kristine Larsen, Department of Geological Sciences, Central Connecticut State University

Kristine Larsen: “‘Forgot even the stones’: Stone Monuments and Imperfect Cultural and Personal Memories in The Lord of the Rings” #s227 #IMC2018 @IMC_Leeds #Tolkien pic.twitter.com/d7MnnuC0ve

‘I will give you a name’: Sentient Objects in Tolkien’s Fiction
J. Patrick Pazdziora, College of Liberal Arts, Shantou University, China

J. Patrick Pazdziora on “‘I will give you a name’: Sentient Objects in Tolkien’s Fiction”. #s311 #IMC2018 @IMC_Leeds #Tolkien pic.twitter.com/kwLho04eOE

Tolkien’s ‘The Lay of Aotrou and Itroun’ and The Lay of Leithian
Yvette Kisor, School of American & International Studies, Ramapo College of New Jersey

Yvette Kisor on “Tolkien’s ‘The Lay of Aotrou and Itroun’ and The Lay of Leithian” #s311 #IMC2018 @IMC_Leeds #Tolkien pic.twitter.com/gGx05f1phb 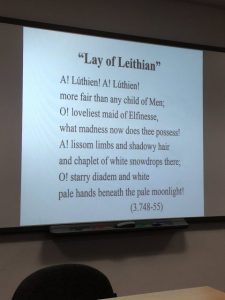 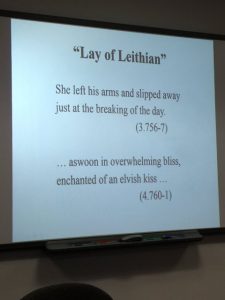 Robin Anne Reid on “The Grammar of Historical Memory in Tolkien’s Legendarium: The Tale of Beren and Lúthien” #s311 #imc2018 @IMC_Leeds #Tolkien pic.twitter.com/xtgPSBgBB7

#Tolkien: Medieval Roots and Modern Branches, I: first up, Andrzej Wicher on “Some Boethian Themes as Tools of Characterization in J.R.R. Tolkien’s Lord of the Rings” #s749 #IMC2018 @IMC_Leeds pic.twitter.com/lYpHpz7puK 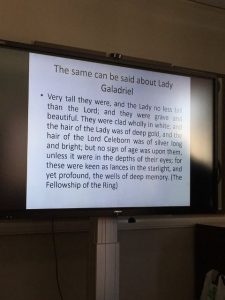 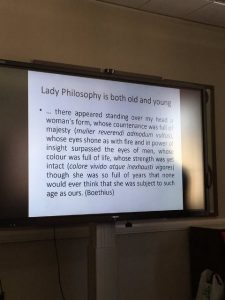 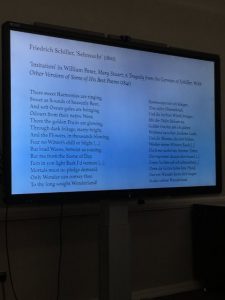 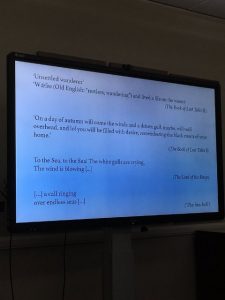 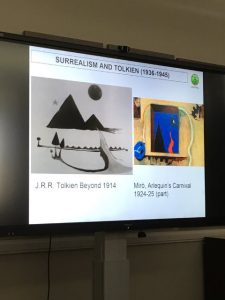 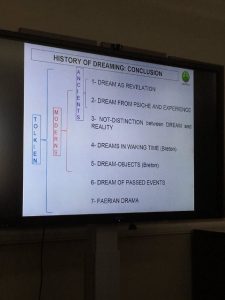 Brad Eden on “A Man of His Time?: Tolkien and the Edwardian Worldview” #s849 #IMC2018 @IMC_Leeds #Tolkien pic.twitter.com/vgU6DSLZof

Not much chance of live-tweeting for this last session, as I was (actively!) moderating! But the Tolkien @ IMC Leeds sessions ended (as always!) with a meal with the Tolkien scholars, presenters and attendees!

Tolkien at IMC Leeds has concluded! Thanks to all wonderful speakers and attendees! Time for food now – here’s a legendarium of Tolkien scholars! #Tolkien #IMC2018 @IMC_Leeds pic.twitter.com/Pco2YQpAGO