A couple of weeks ago I blogged about one of the main authors I have included in my forthcoming monograph (Celtic Myth in Contemporary Children’s Fantasy): Lloyd Alexander. Lloyd Alexander’s fantasy world of Prydain is modelled upon a particular vision of medieval Wales and its legends, mainly as represented in Lady Charlotte Guest’s 19th-century translation of the Mabinogion, as well as her extensive notes. In a number of published talks and essays, Alexander reflected at length on his inspirations and research for The Chronicles of Prydain, and emphasized (and provided details about) the enormous range of material he consulted and the intensity of his fascination with Welsh mythological texts.

One example of Lloyd Alexander’s self-reflection appears in his article “The Flat-Heeled Muse”, published in The Horn Book Magazine in April 1965, only a year after the first volume of the Chronicles, The Book of Three, was published (and a few months before the second volume, The Black Cauldron, appeared). The extract below shows not only the obsessive nature of Alexander’s “Welsh research” but also his eventual realization that research is only the starting point and that, after a while, the creative mind needs to put the research aside and start shaping his/her own narrative – or, in the case of fantasy literature, his/her own imaginary world (with its own, consistent mythology, cultures, etc.):

My first intention was to base a fantasy on some of the tales in the Mabinogion, and I started research accordingly. However, I soon found myself delving deeper and deeper into the legends’ origins and significance: searching for what exactly I didn’t know — to the despair even of the librarians, who must be among the most patient people on earth. A historical-realistic approach did not work. Unlike the Irish and Norse, the Welsh mythology has been irreparably tampered with, like so many pictures, old and new, cut apart and pasted every which way.

Sifting the material, hoping to find whatever I was groping for, I accumulated box after box of file cards covered with notes, names, relationships, and I learned them cold. With great pains I began constructing a kind of family tree or genealogical chart of mythical heroes. (Eventually I found one in a book, already done for me. Not the first book, but the fifteenth!) Nothing suited my purposes.

At that point, the Muse in Charge of Fantasy, seductive in extremely filmy garments, sidled into my work room. “Not making much headway, are you? How would it be,” she murmured huskily, “if you invented your own mythology? Isn’t that what you really want to do?”

She vanished. I was not to see her again in her aspect as temptress, but only as taskmistress. For she was right.

Abandoning all I had collected, I began once more, planning what eventually became The Book of Three. My previous labor had not been entirely in vain; it had given me roots, suggestions, possibilities.

Indeed, the Mabinogion provides some of the main structures of Prydain, but Alexander creatively reshaped and reconfigured his Welsh source-material to create an original world, memorable characters and exciting plotlines.

What got me excited, though, was the second paragraph of this extract, especially the phrases I have highlighted in red. To take them one-by-one:

I accumulated box after box of file cards covered with notes, names, relationships…

Lloyd Alexander’s manuscripts are held in the Free Library of Philadelphia, and the “file cards” he is mentioning here are now part of the Lloyd Alexander papers in the Children’s Literature Research Collection of the library. The catalogue describes them as: “Alphabetized set of index cards with names for characters, places and objects. Also includes brief planning notes.” I was lucky to see some of these cards for my research. Some of them are very detailed indeed, others are very brief, but they all represent Alexander’s genuine effort to master the tangled web of characters and their roles and relationships in the tales of the Welsh Mabinogion.

Now this reference was even more intriguing, because as soon as I read this I knew I had seen this family tree somewhere! Or, rather, it happened the other way round. While pottering around with the few items from the Lloyd Alexander papers that the Free Library of Philadelphia have digitized and included on their website as images, I found one entitled: “Prydain nobility family tree” (see here for the image and description, and here for the image in higher resolution). However much this may look like a family tree of the “noble” families of Prydain, because of its inclusion of key figures such as Gwydion, Math and Pryderi, it isn’t: it is, actually, exactly Alexander’s attempt to create a “genealogical chart” of the “mythical heroes” in the Mabinogion described in the article above. A number of Mabinogion heroes and heroines (e.g. Arianrhod, Blodeuwedd, Elphin, Tegid, etc.), whose names did not make it to Alexander’s Prydain mythology, appear in this tree in their correct position of kinship.

I found one [i.e. a family tree of mythical heroes] in a book, already done for me…

This last piece of information drove me crazy for a few weeks. I was determined to find out which of the books that Lloyd Alexander had read included such a family tree or genealogical chart of Mabinogion characters. I knew it wasn’t in one of the books Alexander had mentioned by name (of which there are very few – see my previous blog post on Lloyd Alexander) so discovering this book would add one more source of information on ‘Celtic’ myth that Alexander had consulted and which may have shaped his understanding of the Welsh material. I eventually found it (hooray!) among some of the usual suspects of early scholarship on Welsh and Irish medieval literature: T.W. Rolleston’s Myths & Legends of the Celtic Race (London: G.G. Harrap & Co, 1911; the book is out of copyright and available to browse in its entirety here). 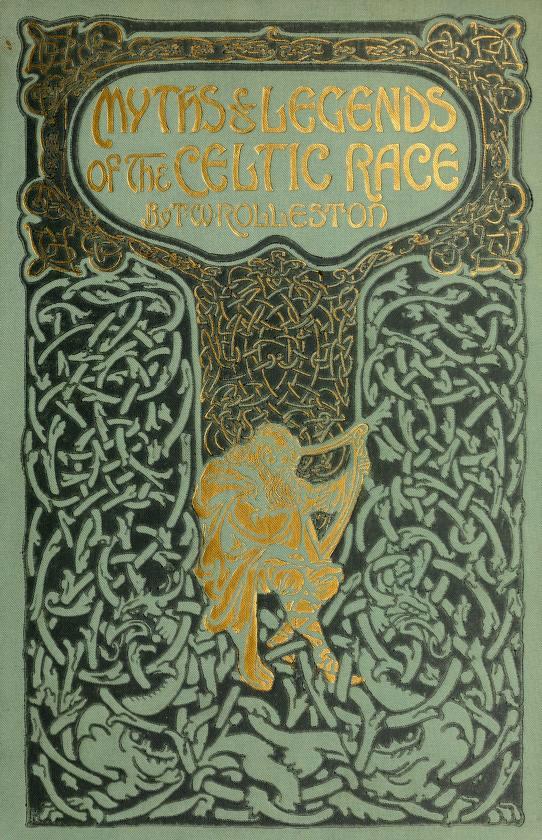 Rolleston’s book is typical of its period in that it begins with a history of the ‘Celts’, then moves on to an exposition of their religion, and then retells the Irish and Welsh mythological material with a fair amount of ‘intervention’ in order to construct a coherent, linear narrative from cosmology, to deities, all the way to heroes and their legends. To achieve this end, Rolleston mixes indiscriminately early texts (which are, conceivably, closer to pre-Christian, pagan beliefs) with very late ones (e.g. dates as late as the 16th and 17th centuries). He also regularizes stories in order to make them fit with each other and with classical models of mythological compendia. In the spirit of this pursuit for order and consistency, he includes three “genealogical tables” for the Welsh material: “Gods of the House of Dōn”, “Gods of the House of Llyr” and “Arthur and his Kin” (pp. 350-2) – clearly the ones Lloyd Alexander refers to. 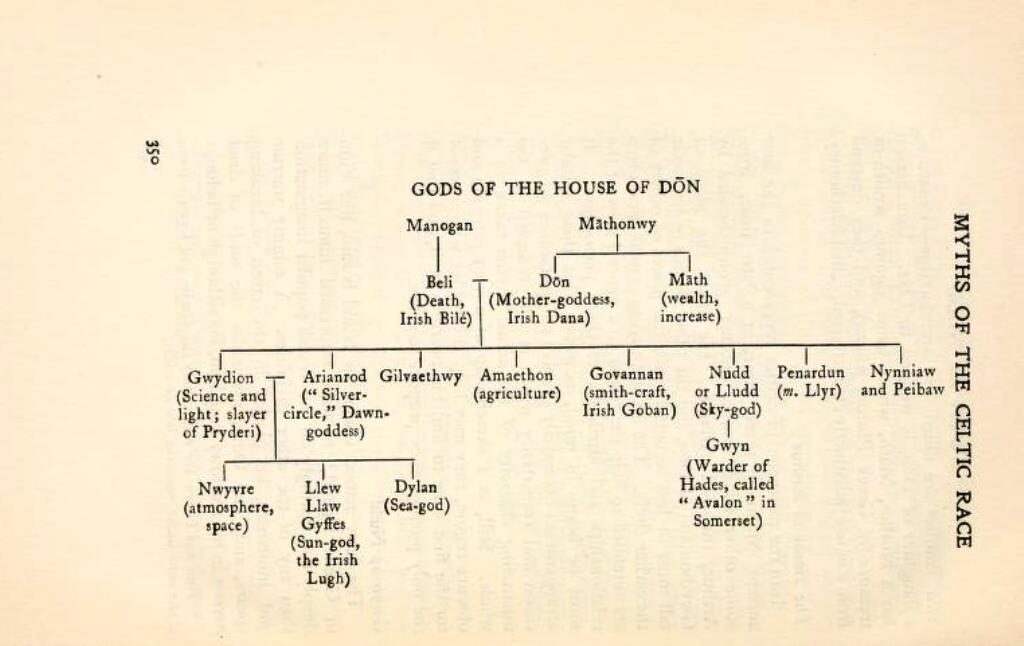 In addition, Rolleston’s book includes 64 illustrations and photographs of particular locations and scenes from Irish and Welsh legends and tales. One of them seems to have been influential for the scene in The Book of Three in which the Horned King‘s men burn humans alive in wicker baskets:

Before Gwydion could speak again, the Horned King, bearing a torch, rode to the wicker baskets
and thrust the fire into them. Flames seized the osier cages; billows of foul smoke rose skyward. The
warriors clashed their shields and shouted together with one voice. From the baskets rose the agonized screams of men. Taran gasped and turned away.

The illustration of “Human Sacrifices in Gaul” in Rolleston’s book provides a fitting visual companion for Alexander’s description and links the medieval Welsh legends with the ancient ‘Celts’ of the 1st century BC (though my book problematizes such linear understandings of ‘Celticity’). 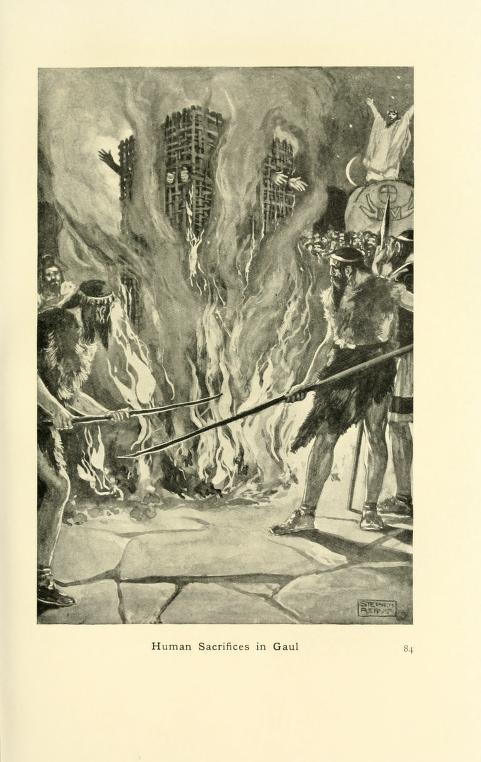 So here is my little puzzle solved – at least to my satisfaction! For more on Alexander’s engagement with Rolleston, you’ll have to wait for my book, due out early next year!

Lloyd Alexander’s article “The Flat-Heeled Muse” has been made available by the Horn Book Magazine here.

The entire catalogue of Lloyd Alexander’s papers at the Children’s Literature Research Collection, Free Library of Philadelphia can be found here.

Rolleston’s Myths & Legends of the Celtic Race is out of copyright and available to read/browse here.