As I have written in previous entry, I am currently working on a monograph on Celtic Myth in Contemporary Children’s Fantasy for the Palgrave Macmillan Critical Approaches to Children’s Literature series. I have, therefore, been reading and re-reading primary and secondary materials related to the works and creative processes of Alan Garner, Susan Cooper, Lloyd Alexander, Pat O’Shea, Mary Tannen, Jenny Nimmo, Kate Thompson and many other writers who were inspired by Welsh and Irish medieval texts. 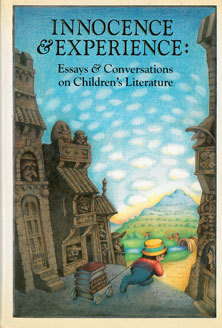 A book that I managed to get hold of recently (thank God for libraries and inter-library loans!) is Innocence and Experience: Essays and Conversations on Children’s Literature, edited by Barbara Harrison and Gregory Maguire and published in 1983. This book – which I haven’t seen cited in children’s literature scholarship as much as it deserves – is a compilation of lectures, panel discussions, informal remarks and such-like reflections from novelists, illustrators, critics, publishers, librarians, and educators who took part in events organized by the Center for the Study of Children’s Literature at Simmons College, Boston in the 1970s and 1980s. The list of contributors includes Penelope Lively, Lloyd Alexander, Susan Cooper, Alan Garner, Maurice Sendak, Nancy Bond, and many others.

While reading one of Susan Cooper’s contributions, “Nahum Tarune’s Book” (a reflection on Walter de la Mare’s anthology of verse Come Hither, and the powerful influence it had over Cooper’s imagination and writing practice) I was twice stopped in my tracks. Cooper very eloquently discusses the “great excitement that is a mixture of astonishment and delight” (p. 82) that certain books, poems, and works of art are capable of producing, and within that context she reminisces about her first experience of the theatre and the “magical” sensation of joy that it offers. Cooper adds:

Why is the feeling so much intensified in the theater? It must be because… that special delighting quality comes totally alive to a degree possible nowhere else. The fantasy is made real. The other world is there, before your eyes. You are caught up, while the play lasts, in a waking dream. (Cooper, 1987, p. 82)

Any student of Tolkien reading this will have made the link already. This extract couldn’t help but bring back to my mind Tolkien’s words on this most mysterious and enigmatic notion he refers to in “On Fairy-Stories”, the idea of “Faërian Drama”.

Now‚ “Faërian Drama” – those plays which according to abundant records the elves have often presented to men – can produce Fantasy with a realism and immediacy beyond the compass of any human mechanism. As a result their usual effect (upon a man) is to go beyond Secondary Belief. If you are present at a Faërian drama you yourself are, or think that you are, bodily inside its Secondary World. The experience may be very similar to Dreaming and has (it would seem) sometimes (by men) been confounded with it. But in Faërian drama you are in a dream that some other mind is weaving, and the knowledge of that alarming fact may slip from your grasp. (Tolkien, 2008, p. 63) 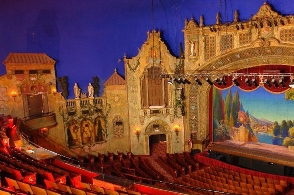 Now there are clear differences here too. Cooper is talking about the experience of real theatre, in the primary world, creating the illusion of the fantasy world materialized, an experience akin to a “waking dream”. Tolkien, on the other hand, is talking about actually experiencing a secondary world through a dramatic performance devised by the Elves – an experience akin to “a dream that some other mind is weaving”.* Still, in both cases we have two significant writers who have created splendid fantasy worlds drawing parallels between drama/performance, fantasy/secondary worlds and dreaming/visions.**

And while I was still pondering this extract, thinking about the common elements between Cooper’s reflective essay and Tolkien’s “On Fairy-Stories” (a subject I have explored in my chapter for the Companion to J.R.R. Tolkien on Tolkien’s legacy), I stumbled upon a second noteworthy quotation. Talking about images in dreams, and how they often find their way in her fiction, Cooper reminisces about a particular scene in The Grey King (1975), the fourth of her The Dark is Rising (1965-1977) series:

I was working on a book at the time, and a few weeks later I came to a point in my story where two of my characters were to find themselves in a magical place called the Lost Land. That was an image – an Atlantis myth, I suppose – that had haunted me ever since I was very young. (Cooper, 1987, p. 83)

The Tolkienian point of interest is unmissable here too. Tolkien famously talked about his “Atlantis complex” (Tolkien, 1981, p. 213), a recurring dream throughout his life of a great wave, flooding and engulfing everything around him, which he eventually turned into a new version of the Atlantis myth in the story of Númenor. Cooper’s underwater Lost Land ties the classical tradition of Atlantis with the submerging of Cantre’r Gwaelod (‘the low/bottom cantref’), as referenced in Boddi Maes Gwyddneu (‘The drowning of Gwyddno’s plain’), a 12th-century Welsh poem in the Black Book of Carmarthen (the tale of this  underwater land survived in later Welsh folklore). 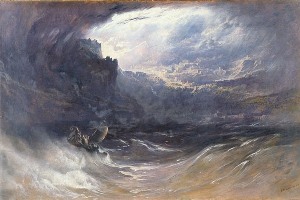 Fantasy as a waking dream-performance, archetypical images of submerged lands, and – perhaps most importantly – a desire to self-reflect and self-theorize the fantasy writing process. Do my two little extracts point – perhaps in a very small way – to some common elements in the practice and thematics of writing fantasy? We know that Susan Cooper studied English at Oxford, via the syllabus Tolkien and C.S. Lewis devised and has written about reading The Lord of the Rings with excitement when it was first published, and finding that it was “full of echoes of the Anglo-Saxon, Norse, and Icelandic literature we were studying ”  (Copper, 2002, p. 143). As noted above, I have also discussed parallels between Tolkien’s self-theorizing in “On Fairy-Stories” and the reflective essays of Susan Cooper, Alan Garner, Diana Wynne Jones and Ursula K. Le Guin (Fimi, 2014).

The funny thing about Cooper’s essay “Nahum Tarune’s Book” is that I had read it before! As I was nearing its end, I kept getting those strange feelings of dejavu – a sensation that I had heard all these ideas a long time ago. And I plainly had! The essay was reprinted in Dreams and Wishes (1996), Cooper’s reflections on her own art, a book I had read many years ago. It’s strange how the mind works and how links and parallels sometimes immediately leap off the page, but other times do not. But those are the pleasures of research. I hope that – at least – this little story sings the praises of re-reading – revisiting primary and secondary sources with a fresh eye and a new lens.

* Janet Brennan Croft (2014) has explored the potential origins of Tolkien’s cryptic “Faërian Drama” pointing to Middle English texts such as Pearl and Sir Gawain and the Green Knight, as well as Charles Dickens’ A Christmas Carol (her article is available to read here). I also understand that Dr Kelley M. Wickham-Crowley has a forthcoming article in Tolkien Studies entitled: “‘Mind to Mind’: Tolkien’s Faerian Drama and Sir Orfeo”, which I am really looking forward to reading.

** Another point of difference is Cooper’s reverence for the theatre and its potential to create a fantasy world, and Tolkien’s apparent rejection of drama as a form capable of producing the ‘secondary belief’ necessary for fantasy (see Tolkien, 2008, pp. 61-2). That didn’t stop him, though, from being completely enchanted by Peter Pan which he saw on the stage on April 1910 (see Fimi, 2005). He wrote in his diary after watching it: “Indescribable but shall never forget it as long as I live. Wish E.[dith] had been with me” (Carpenter 1977, pp. 47-8).