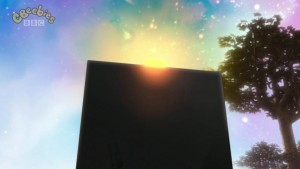 Having a 17-month-old toddler means that I was well awake and CBeebies was on at 7:40 am this Sunday. I was pulled out of my half-awake, half-asleep state, when in this morning’s Q Pootle 5 episode a monolith suddenly appeared in the early morning light, discovered by the bewildered Q Pootle 5 as soon as he woke up. What made me jump, was the sun slowly rising behind the monolith, and Q Pootle’s initial reaction – hesitation over whether to touch and explore the mysterious object or leave it alone. Now, where had I seen all of that before? 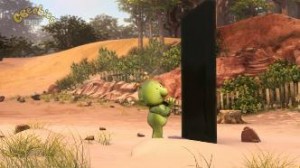 Q Pootle 5 is an animated series, inspired by the books by Nick Butterworth. It follows a small friendly alien, Q Pootle 5, and his friends Oopsy, Eddi, Stella, Ray, Groobie, and Bud-D on the planet Okidoki (there’s one more major character, but he’s actually another planet, Planet Dave!) Nick Butterworth, who worked closely with his son to bring Q Pootle from page to screen, has pointed out in a recent Radio Times interview that the world of Q Pootle 5 is:

“A combination of low tech and high tech. I drew inspiration from the way children’s imagination trumps reality. A cardboard box becomes a boat or a spaceship. A hair dryer makes a great outboard motor – or a lateral stabilising jet! Cushions, chairs, a bit of old hi-fi equipment with knobs to twiddle, these are all you need to go exploring.”

This already sounds like convincing world building based on good old science fiction tropes and using science fiction as a symbolic way to reaching, exploring and engaging with a toddler’s imaginative play. It shouldn’t have come as a surprise, then, that this morning’s episode decided to “play” with one of the canonical cinematic texts of modern SF, Stanley Kubrick’s 2001 A Space Odyssey. 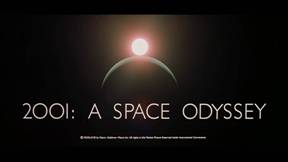 SF is a subject I teach to my undergraduate students, and 2001 is a text I always include in my survey SF module: its iconic aesthetics, its philosophical underpinnings and its “big ideas” (not necessarily radical and new ones by the 1960s, but definitely memorably explored) make it a compelling text to examine in class. Q Pootle this morning grappled with the ontology of the monolith, the mysterious object in Kubrick’s film that seems to be some sort of catalyst for mankind’s evolutionary leaps: from hominid ape, to Homo sapiens, to the mystical and poetic “Star Child”. With my students I discuss Nietzsche’s ideas, SF tropes of alien intervention in human evolution, and what the heck is that Star Child. Q Pootle and his friends make different educated guesses as to the nature of the monolith, trying to use it as a blackboard, a slide and a see saw! 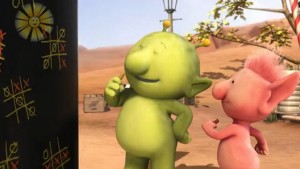 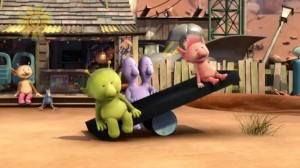 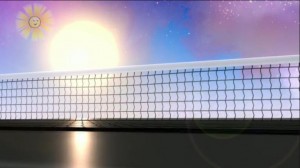 Groobie finally arrives to solve the riddle. He presses some invisible button on the monolith, which promptly causes it to lift up gracefully in the air (complete with Richard Strauss’s Also sprach Zarathustra playing in the background and the sun appearing behind it as if it is just rising) to reveal a table tennis net sprouting on one side, and folding legs on the other! Groobie exclaims: “It’s my Galacto 2001 pop-up ping-pong table!” And if that’s not enough of a “homage”-cum-parody scene, one of the folding legs of the table quickly fails, and Bud-D fixes it with his spanner, which he then throws in the air in triumph: we see it rising up in slow motion and rotating, bringing to mind both the famous “transition” scene in 2001 from the first tool (the bone) to the most evolved one (the spaceship), and the spanner Bowman uses later on to “terminate” HAL (arguable, the longest murder scene in modern film). 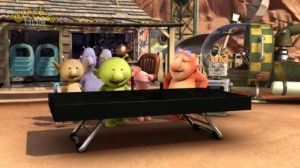 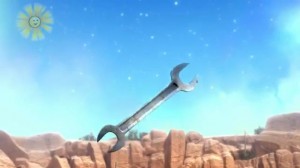 Playful intertextuality is nothing new in children’s books, and has been used for ludic purposes by masters of the picturebook form such as Anthony Browne. But it was still lovely to have my brain exercised at 7:40 am on Cbeebies. And I am wondering – since intertextuality often works in anarchic ways – whether my toddler son will exclaim: “That’s Groobie’s ping pong table!” when, one day, he gets to see 2001 A Space Odyssey!
Tagged on: 2001 A Space Odyssey, CBeebies, intertextuality, monolith, Q Pootle 5
By Dimitra Fimi | 6th July 2014 | Academic Teaching, Books, Children's Literature, Science Fiction | No Comments |