It’s been a busy autumn, with my first public lecture after having a baby, new publications in the pipeline and new, exciting academic ventures. 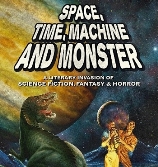 On 18-19 October I took part in Literature Wales’ Space, Time, Machine and Monster festival at the Riverfront Arts Centre, Newport. My talk was on “Tolkien’s Middle-earth: Fantasy and the Reality” and explored the depth and vast detail of the Middle-Earth world. It also examined Tolkien’s attempts to link this imaginary world to reality via ‘mythical’ history and the construction of artefacts supposedly from Middle-Earth. This was the first time I had given a public lecture after nearly a year (what with the last stages of pregnancy and maternity leave, my last such appearance was my keynote for The Politics of Contemporary Fantasy conference at Wurzburg in October 2012!) It was lovely to give a Tolkien lecture again: it was very well-attended, I had very interesting questions and the discussion was lively and informed – great audience! I also enjoyed the session on Arthur Machen (the Welsh writer of ‘weird tales’, admired by H. P. Lovecraft, and recognised by Jorge Luis Borges) presented by Gwilym Games and the brilliant Catherine Fisher.

I am also very excited to be embarking on a new academic adventure: in January, and for the entire Spring semester 2014, I will be joining the Mythgard Institute (a new, online academic institution based in the US) as a Visiting Professor. I will be teaching a brand-new online course on Celtic Myth in Children’s Fantasy which bridges my previous expertise with my current research. I am looking forward to exploring the Irish and Welsh medieval tales and poems that make up the magic of ‘Celtic’ myth, and to teaching some of my favourite contemporary fantasy novels, many of which have won prestigious awards (such as Alan Garner’s The Owl Service; Susan Cooper’s The Grey King; Jenny Nimmo’s The Snow Spider; and Kate Thompson’s The New Policeman). Enrolment is now open!