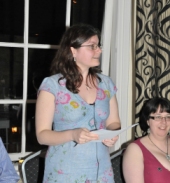 On 16 April 2011 the Tolkien Society held its Annual General Meeting, this year hosted at The White Hart Royal Hotel, in Moreton-in-Marsh. I was very honoured to be the guest speaker after the formal dinner in the evening, following the AGM. Bearing in mind that previous speakers have included members of the Tolkien family (Priscilla Tolkien, Michael Tolkien and others), Tolkien’s publisher Rayner Unwin and his biographer Humphrey Carpenter, as well as a great number of established names in Tolkien Scholarship (Tom Shippey, Colin Duriez, Patrick Curry, Brian Rosebury, John Garth, among others) I took on the task of the after-dinner talk with some trepidation and was very relieved to see it went down well (for details on the contents of my talk see Charles Noad’s report in Amon Hen). 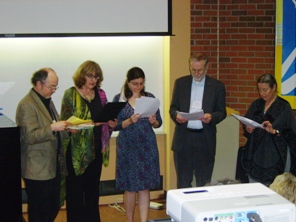 My next Tolkien engagement took me to the US to take part in the “Tolkien at Kalamazoo” sessions. Since 2001 the International Congress on Medieval Studies at Kalamazoo, MI, has included sessions specifically on the work of J.R.R. Tolkien, presided, co-organized and supported by a number of eminent scholars who have published outstanding academic works on Tolkien, like Jane Chance, Verlyn Flieger, and Douglas A. Anderson. This year the congress took place between 12 and 15 May 2011 and there were seven sessions on Tolkien’s work including “Languages in Tolkien’s Legendarium”, “Scholar as Minstrel: Music and Tolkien”, “Geography, Lands, Environments in Tolkien’s Legendarium” and “Returning Heroes” (you can see the programme of the entire conference here and John D. Rateliff has helpfully posted an overview of the Tolkien sessions on his blog). The title of my paper was “Kipling, Tolkien, and Romantic Anglo-Saxonism”, presented as part of the “Romantic Nationalism in Tolkien’s Legendarium” session on Thursday 12 May. I also took part in a dramatic reading of Tolkien’s poem “The Lay of Aotrou and Itroun”, together with John D. Rateliff (who organised this performance), Deidre Dawson, Richard C. West and Deborah Webster Rogers. For my photos from Kalamazoo see here.

On 23 May my Fantasy online course at UWIC started (Fantasy Literature: Tales Before and After Tolkien). We are now in the 4th week of the course, having explored the roots of modern fantasy (Romanticism, the literary fairy tale, and the work of Victorian and Edwardian fantasist such as George MacDonald, William Morris, Charles Kingsley and J.M. Barrie), now examining the work of J.R.R. Tolkien, and looking forward to studying the contributions of later fantasy authors (including C.S. Lewis, Ursula K. Le Guin, Philip Pullman and J.K. Rowling). We are very fortunate to have a special guest this time: Douglas A. Anderson, author of the celebrated Annotated Hobbit, has joined the Discussion Board of this online course and is taking part in our debates and discussions. TheOneRing.net announced our special guest here. Also, Douglas A. Anderson now has a new blog, which I am sure you will all want to check out!