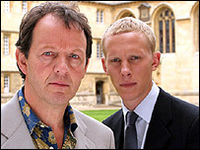 Lewis Carroll, C.S. Lewis or Robbie Lewis? An Oxford-academic-cum-fantasy-writer, whose “muse” is called Alice; an elderly don (specialist on Lewis Carroll) with secret vices; a girl who literally goes “through the looking glass” (killed by a Persian mirror); and a role-playing-games-obsessed teenager; all figured in episode 1 of the new series of Lewis on ITV, titled “The Allegory of Love” (taken from one of C.S. Lewis’s best-known academic works). Expectedly, the episode included ample references to the Inklings, especially C.S. Lewis and J.R.R. Tolkien, together with (real and imagined) trivia about them, mostly coming from the mouth of DS James Hathaway, a much more sophisticated character than his DI Robert Lewis who doesn’t have any time for this “historical fancy stuff”. The episode – as is often the case with this series – was a mixture of literary references, plausible and implausible plot threads, and clever lines to illustrate the newly-established relationship between Lewis and Hathaway, a kind of inverted Morse – Lewis duo. Perhaps the best moments of this programme are those that evoke the atmosphere of Oxford, sometimes overtly intellectual and elitist, others haunted and disturbingly dark, and in this episode fertile ground for the imagination of some of the best fantasy writers. The question of why Oxford has generated so many authors of fantasy literature continues to fascinate!