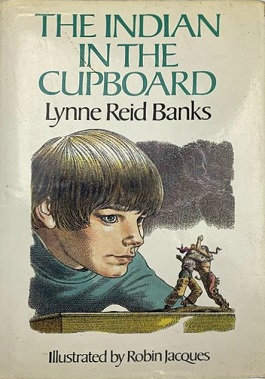 I am on research leave at the moment, working – among other things – on a new book on miniature worlds and characters in children’s fantasy. One of the primary sources I’ve been re-reading recently is Lynne Reid Banks’ The Indian in the Cupboard series from the 1980s and 1990s (The Indian in the Cupboard, 1980, The Return of the Indian, 1985, The Secret of the Indian, 1989, The Mystery of the Cupboard, 1993, and The Key to the Indian, 1998). What struck me again and came to my mind today once more as we commemorate Remembrance Day, is the portrayal of Tommy, the WWI medic.

The premise of Banks’s series is that the young hero, Omri, discovers a magical cupboard that brings small plastic figures to life. Not only that, the little people that come out of it are real, living people from different historical periods – the 18th-century Iroquois warrior, Little Bear, is a recurring one. 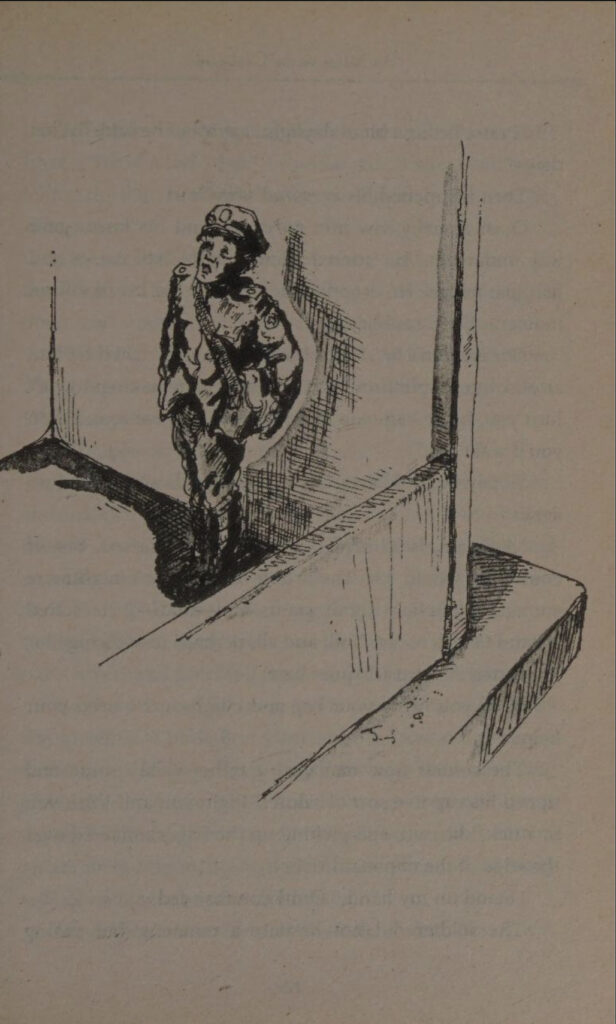 Tommy, as illustrated by Brock Cole

In the first book, The Indian in the Cupboard, Tommy is one of these plastic figures. He is really a side character, a tiny plastic toy brought to life by Omri not to be a protagonist, but just someone to tend to the wounds of the titular Indian (Little Bull) and Boone, the cowboy (another recurring character). Tommy emerges from the cupboard straight out of the trenches. He thinks he’s dreaming, and he’s so grateful for this unexpected break from the horrors of the front. He says:

“A dream, is it? Well … I should’ve guessed. Yes, of course. It would be. The whole rotten war’s nightmare enough, though, without giants and—and—” He stared around Omri’s room. “Still and all, perhaps it’s a change for the better. At least it’s quiet here.”

When Tommy is done with his medical task, and Omri asks him if he’s ready to “wake up” now, and return to his proper time and size, he says:

“Not that there’s much to look forward to except mud and rats and German shells coming over… Still, got to win the war, haven’t we? Can’t desert, even into a dream, not for long, that is—duty calls and all that, eh?” 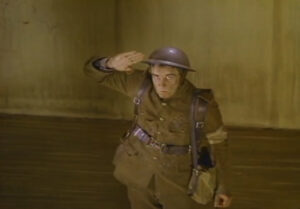 Steve Coogan as Tommy in the film adaptation of The Indian in the Cupboard, directed by Frank Oz, 1995

And he salutes Omri, by saying: “Tommy Atkins, at your service”. This name is, of course, a shorthand: the slang for a common soldier at WWI, a term already in existence in the 19th century, but particularly linked with the Great War.

When Tommy is brought back again, later on in the novel, he’s just dodged a “Minnie”:

“It’s our name for a Minnenwerfe – that’s one of them big German shells. Make an ’orrible row they do, even before they land, a sort of whistle that gets louder and louder, and then— KERBOOM!”

But has he actually dodged the Minnie? When Omri returns him once again to the cupboard he’s worried for him, but Tommy wants to go back and help the wounded. In the sequel, The Return of the Indian, Omri needs Tommy again to tend to the wounded Little Bull. But in the cupboard, he finds only Tommy’s medical bag and:

the uniform, neatly folded, with the orderly’s cap upside down on the top of the pile. And the boots. And the puttees, the khaki bandages they wore round their legs in that war, neatly rolled, inside the cap. Nothing else. 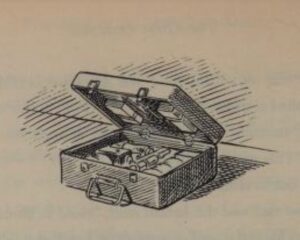 Tommy hadn’t survived. The Minnie had got him. “His snubby, cheerful face, his bravery and his gentle hands were gone, with so many thousands of others, into the mud of the trenches”, the narrator’s voice (expressing Omri’s thoughts) adds.

This tiny flavour (literally scaled down!) of WWI in this children’s fantasy text feels initially like a bit of an afterthought, as if the author has just added another layer of historical detail to the story. At the end of the day, what the plot really needs is a medic who can help the protagonists heal, and, I guess, a WWI soldier with a medical bag wouldn’t be an unusual plastic figure to have and has handy skills. But I think Tommy also highlights some of the main themes of the book: the tiny toys are a link with the past, which can be disturbing, difficult, harsh. The young reader is here confronted with a realistic scenario of what happened to thousands of nameless Tommies, in a way that becomes personal, involved, painful. Miniature Tommy’s fate is literally in Omri’s hands. What if he hadn’t sent him back? What if he’d never met him? Omri’s sadness and shock when he discovers Tommy’s death is pushed aside quickly, as he needs to focus on the newly-wounded Little Bull. But he does acknowledge his grief. “Later. He would think about Tommy, and mourn for him, later.” And, in that acknowledgment, in that projected mourning (even if we never see it “on stage”, so to speak, in the novel), the book makes a contribution to creating empathy, via fantasy, for the collective trauma of one of the most painful moments for an entire generation.

4 thoughts on “Plastic toys and WWI trauma: Tommy in Lynne Reid Banks’ The Indian in the Cupboard”