One of the most iconic scenes from Peter Jackson’s cinematic adaptation of The Lord of the Rings: The Fellowship of the Ring is the moment when Frodo, Sam, Merry, and Pippin, having set off from the Shire towards the great unknown, hear a horse approaching and quickly hide underneath a tree root, where they just about manage to escape the Black Rider who comes looking (see stills below): 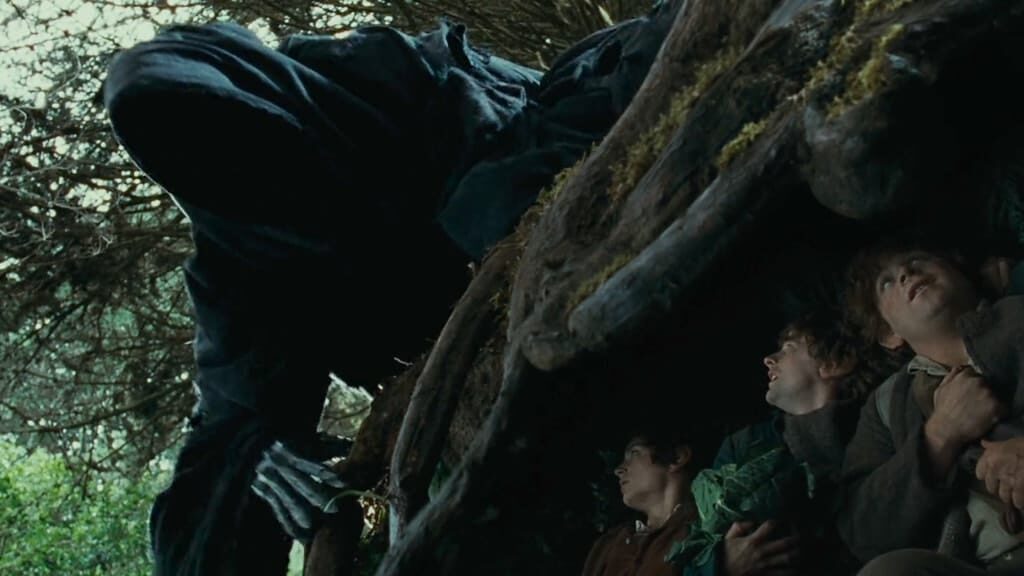 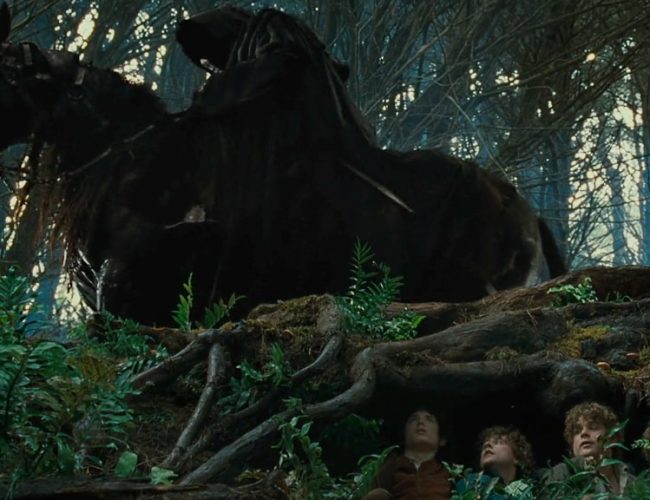 This scene seems to have come fron artist John Howe, who worked on the films, and reproduces very closely his work “The Black Rider”, initially created for the 1987 Tolkien Calendar: 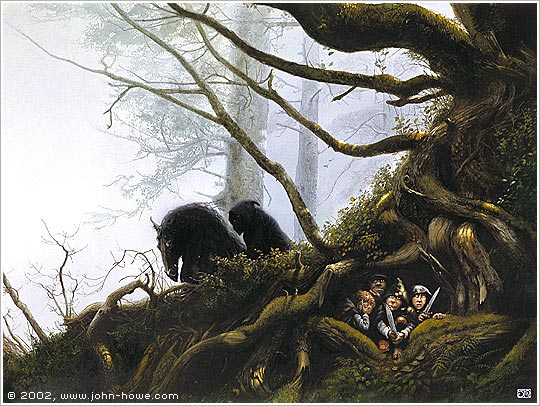 But Howe himself points to yet another source (many Tolkien fans will have made the connection immediately!):

This painting was inspired by the Bakshi movie, where the Hobbits cower under a tree root as the Black Rider seeks them. I thought it was the best scene in the movie, and it must have trod a path in my subconscious, as it certainly is nowhere to be found in the Fellowship of the Ring.[1] 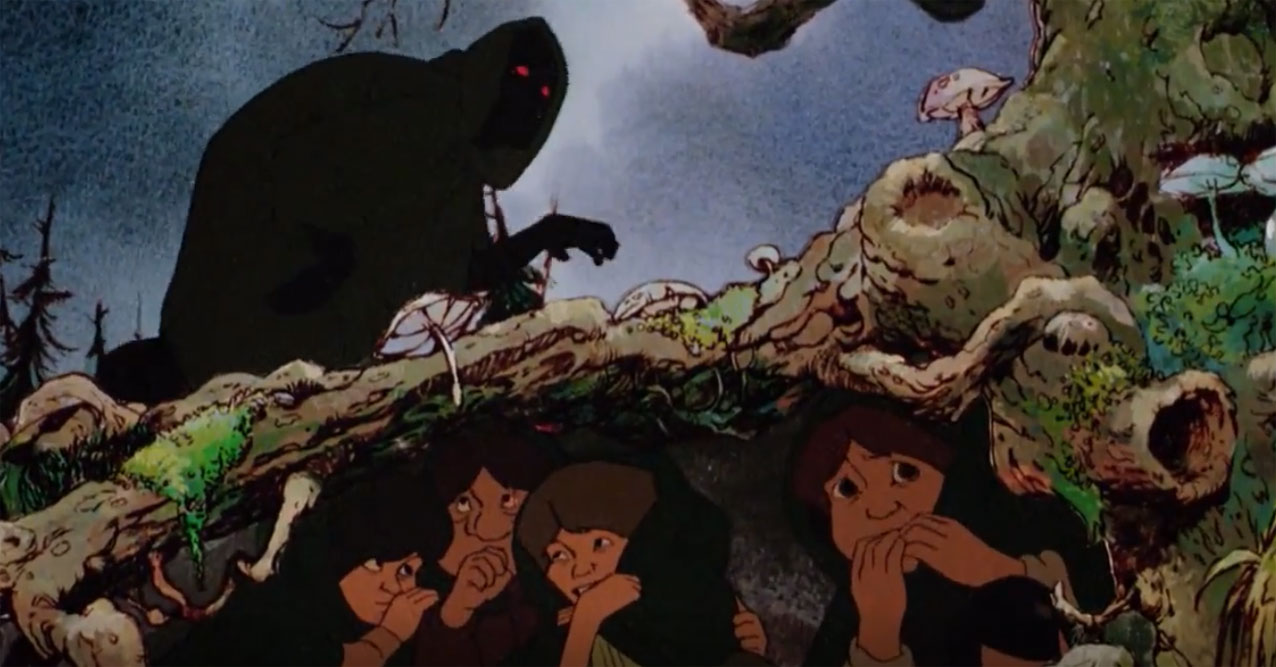 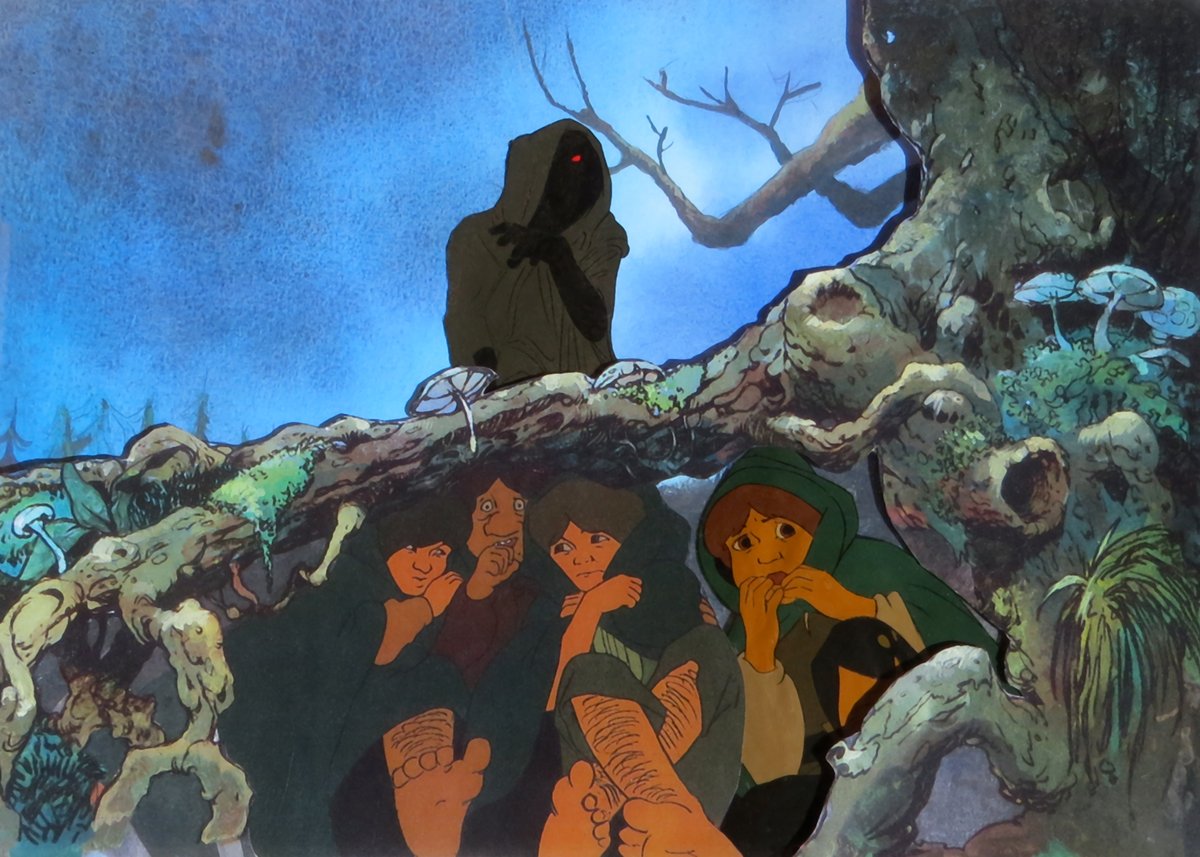 John Howe is absolutely right, of course: Tolkien’s text doesn’t quite describe this scene as depicted by Bakshi’s animated adaptation of The Lord of the Rings. For starters, only three hobbits are part of this incident: Frodo and Sam are only accompanied by Pippin at this point (the chapter is titled “Three is a Company”) because Merry has ridden ahead with Fredegar (Fatty) Bolger to “warm the house” at Crickhollow. When they hear what they think may be a pony or horse, Frodo asks Sam and Pippin to get out of sight, and, in fact, they separate, rather than huddle together:

The other two [i.e. Sam and Pippin] ran quickly to the left and down into a little hollow not far from the road. There they lay flat. Frodo hesitated for a second: curiosity or some other feeling was struggling with his desire to hide. The sound of hoofs drew nearer. Just in time he threw himself down in a patch of long grass behind a tree that overshadowed the road. Then he lifted his head and peered cautiously above one of the great roots.

Round the corner came a black horse, no hobbit-pony but a full-sized horse; and on it sat a large man, who seemed to crouch in the saddle, wrapped in a great black cloak and hood, so that only his boots in the high stirrups showed below; his face was shadowed and invisible.

When it reached the tree and was level with Frodo the horse stopped. The riding figure sat quite still with its head bowed, as if listening. From inside the hood came a noise as of someone sniffing to catch an elusive scent; the head turned from side to side of the road.[2]

So Sam and Pippin are in a “little hollow”, while Frodo is on his own behind a tree, and clearly looking at the Black Rider from behind (rather than under) its large roots. 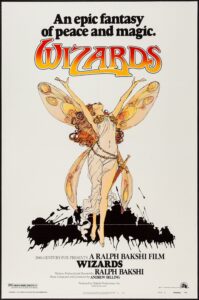 Besides the change of dramatis personae here, though (both Bakshi and Jackson have the four hobbits of the Fellowship already traveling together at this point, and ommit the Crickhollow sequence), I am wondering what was it that prompted Bakshi to portray the four hobbits hiding under a tree root, rather than behind it. I am not denying that this is a very aesthetically pleasing solution, which heightens tension (as the Black Rider is literally crouching just above the hobbits for a while), but I am wondering whether there is yet another visual source Bakshi may be drawing upon here.

And I’d like to put forward the hypothesis that the visual source comes from one of the artists of the British Golden Age of illustration, Arthur Rackham. Rackahm is often identified as one of Bakshi’s inspirations, perhaps not directly for The Lord of the Rings adaptation, but certainly as an artist whose work Bakshi admired. Bakshi is cited a number of times as owning an extensive collection of children’s books with Rackham illustrations[3], and Rackham’s style is credited as a visual source for Bakshi’s earlier film Wizards (1977)[4].

The specific illustration by Rakcham I have in mind as a source for Bakshi’s scene is from his celebrated art for J.M. Barrie’s Peter Pan in Kensington Gardens (1906), an important (yet not dominant) strand of the Peter Pan mythology, in which Peter is a baby boy, and his fantasy land is not Neverland, but Kensington Gardens, which transform into fairyland after lock-out time. I see a particular visual kinship between Bakshi’s hobbits under a gnarled tree root, with the Black Rider crouching above them, and Rackham’s image below, which usually appears as the frontispiece of the book, its caption reading: “The Kensington Gardens are in London, where the King lives”. The man in the black suit (in the position of the Black Rider in Bakshi’s composition) is actually a representation of King Edward VII! 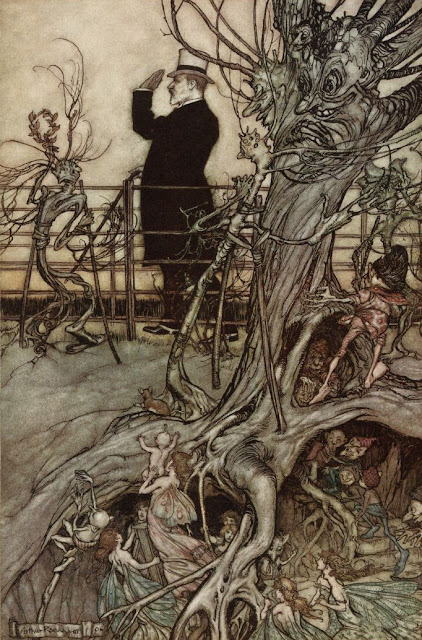 The Kensington Gardens are in London, where the King lives

Notice the tree roots in each of those two images – though the direction of who’s spying on whom is reversed, in both cases we have smaller creatures hiding very effectively under oversized and exposed tree-roots low down in each frame, while a larger black-clad character is above the horizon-line over them.

Rackham actually used this motif of fairy-creatures hiding/residing in tree roots (often with human beings towering above them) multiple times in Peter Pan in Kensington Gardens, as per the sequence below (these images are in the order they appear in the book, and the captions come verbatim from Barrie’s text – which never refers to tree roots as fairy abodes, incidentally): 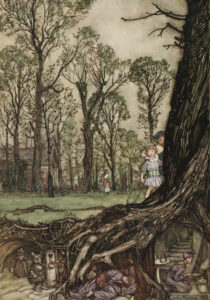 Fairies are all more or less in hiding until dusk. 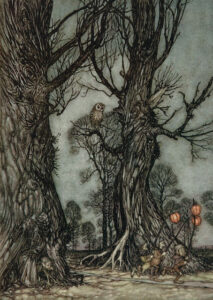 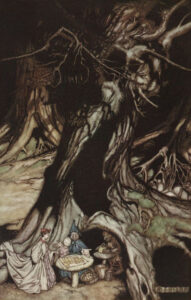 Butter is got from the roots of old trees… 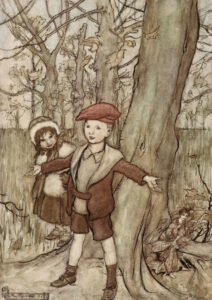 One day they were overheard by a fairy. 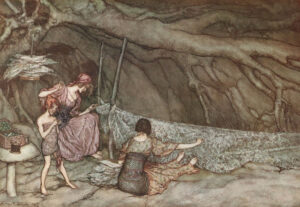 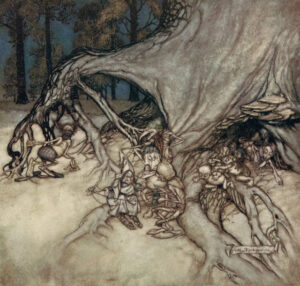 If the bad ones among the fairies happen to be out…

And the use of this motif – which seems to have been a favourite for Rackham – doesn’t stop with this book. I am sure I have missed some, but I have identified at least five more instances of fairy-creatures (goblins, elves, little people) in four more books illustrated by Rackham, living or creeping out of tree roots, as per below: 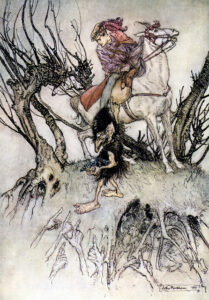 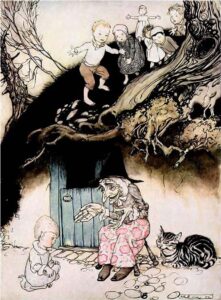 There was an old woman who lived under a hill, from Mother Goose: the old nursery rhymes, illustrated by Arthur Rackham (1913) 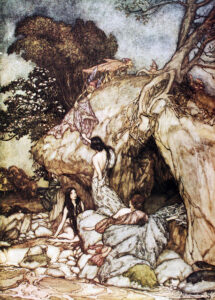 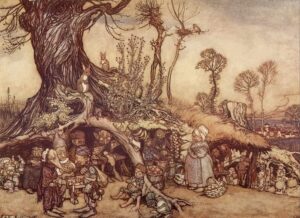 The Little People’s Market, from Arthur Rackham’s Book of Pictures (1913) 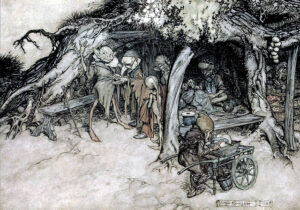 To make my small elves coats, from A Midsummer Night’s Dream, illustrated by Arthur Rackham (1914)

The link, therefore, between Bakshi’s scene of the hobbits hiding from the  Black Rider, and Rackham’s motif of little people hiding under tree roots, especially the frontispiece of Peter Pan in Kensington Gardens, is strong enough, for me at least, to show influence. I would, actually, argue that Rackham has started a chain of visual borrowings that leads from Bakshi, to John Howe, and eventually to Peter Jackson. This is rather apposite, bearing in mind that Tolkien himself was favourable to Rackham’s art as a possible visual model for a proposed animated adaptation of The Lord of the Rings. After he was shown artwork by Rob Cobb for the film in 1957 he commented: “some really astonishingly good pictures (Rackham rather than Disney)”.[5]

I wonder what you think?

[4] In an interview of 6 March 1977 in Valley News (Van Nuys, California), titled “Adult Cartoonist Ralph Bakshi Laughs All the Way to the Bank”, Bakshi is quoted saying that Wizards paid homage “to a genre popular with cartoonists in this country and England called ‘sword and scorcery’. You find this kind of fantasy drawing mainly in comic books and on pocket book covers. In the 1890s artists like Arthur Rackham painted some of this stuff as illustrations in adult books. Throughout ‘Wizards’ I was paying homage to different groups of artists”. The interviewer notes that “more ‘sword and sorcery’ is to follow” with Bakshi’s (then) forthcoming The Lord of the Rings.

One thought on “Tolkien’s Hobbits, a Black Rider, and a Tree Root: chasing a visual chain”