Last month, I visited Cheddar Gorge and Caves, together with my husband and young son. This trip had been “on the list” for many years, and I am grateful to my colleague and fellow Tolkien scholar Dr Kristine Larsen for giving me a gentle nudge to just get on with it!

The reason I’ve always wanted to go, of course, is the Tolkien connection: the caves at Cheddar Gorge are one of the few places in the UK that Tolkien acknowledged as a direct inspiration for a location in Middle-earth: the “glittering caves” of Aglarond, i.e. the caverns of Helms Deep. In a 1971 letter to P. Rorke, who had commented on Tolkien’s famous description (by way of Gimli’s eulogy) of the caves, Tolkien wrote:

I was most pleased by your reference to the description of ‘glittering caves’. No other critic, I think, has picked it out for special mention. It may interest you to know that the passage was based  on the caves in Cheddar Gorge and was written just after I had revisited these in 1940 but was still coloured by my memory of them much earlier before they became so commercialized. I had been there during my honeymoon nearly thirty years before. (Letter 321)

Needless to say, I set off on my visit with Gimli’s famous passage, extolling the virtues of the Glittering Caves of Aglarond, fresh in my mind. What I found out pretty soon was that Gimli’s description seems to follow the visitor’s trail in Gough’s cave (the biggest of the two caves at the site), beginning with the memory of walking from chamber to chamber, seeing small marvels first, and culminating with the much more spectacular sites further in.

Gimli begins his speech, addressed to Legolas, with these words:

“Strange are the ways of Men, Legolas! Here they have one of the marvels of the Northern World, and what do they say of it? Caves, they say! Caves! Holes to fly in time of war, to store fodder in! My good Legolas, do you know that the caverns of Helm’s Deep are vast and beautiful? There would be an endless pilgrimage of Dwarves, merely to gaze at them, if such things were known to be. Aye indeed, they would pay pure gold for a brief glance!” (The Lord of the Rings, The Two Towers, Book III, “The Road to Isengard”).

Gimli also mentions the “immeasurable halls” of the caves, and towards the end of his speech he notes the succession of halls and chambers, the one following the other, which is very much the experience of a visitor entering Gough’s cave. The first remarkable features of the caves Gimli mentions are “veins of precious ore” which “glint in the polished walls”, very much chiming with Photos 1, 2, and 3 below, all taken in the first few chambers of Gough’s cave (with a smartphone, I hasten to add, so passable quality, but I can only imagine what can be done with a professional camera and proper expertise!). 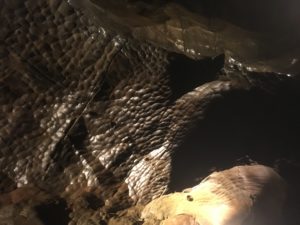 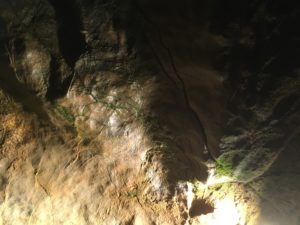 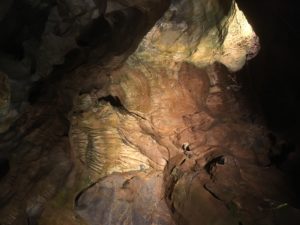 Gimli continues with a description that brings to mind the “organ” in the chamber called “St Paul’s Cathedral” (Photo 4), as Gough’s cave now begins to reveal some of its most marvellous parts: 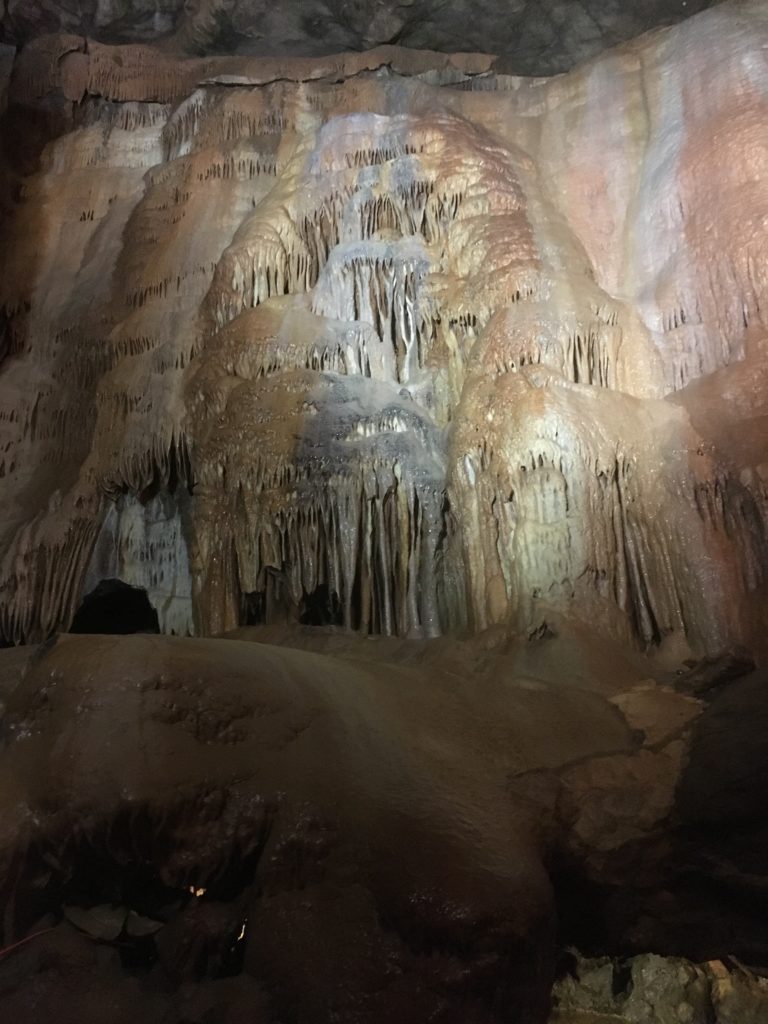 and the light glows trough folded marbles, shell-like, translucent as the living hands of Queen Galadriel. There are columns of white and saffron and dawn-rose, Legolas, fluted and twisted into dreamlike forms; they spring up from many-coloured floors to meet the glistening pendants of the roof: wings, ropes, curtains fine as frozen clouds; spears, banners, pinnacles of suspended palaces!” (The Lord of the Rings, The Two Towers, Book III, “The Road to Isengard”)

The rock formations in Photo 4 looked like they matched exactly Gimli’s description, especially their “white and saffron and dawn-rose” colourings, “translucent as the living hands of Queen Galadriel” (there is an apt comparison with fingers when looking at these stalactites, I think).

Especially the mention in this extract of the stalagmites (“spring[ing] up from many-coloured floors”) and the stalactites (“to meet the glistening pendants of the roof”) bring to mind the first pool one sees in Gough’s cave (Photo 5), just before reaching “St Paul’s Cathedral”, which features both stalactites and stalagmites, as well as “curtains” (also known as “draperies”), a technical term to refer to thin, wavy sheets of calcite hanging downward (see Photo 6, which highlights this detail of Photo 5). 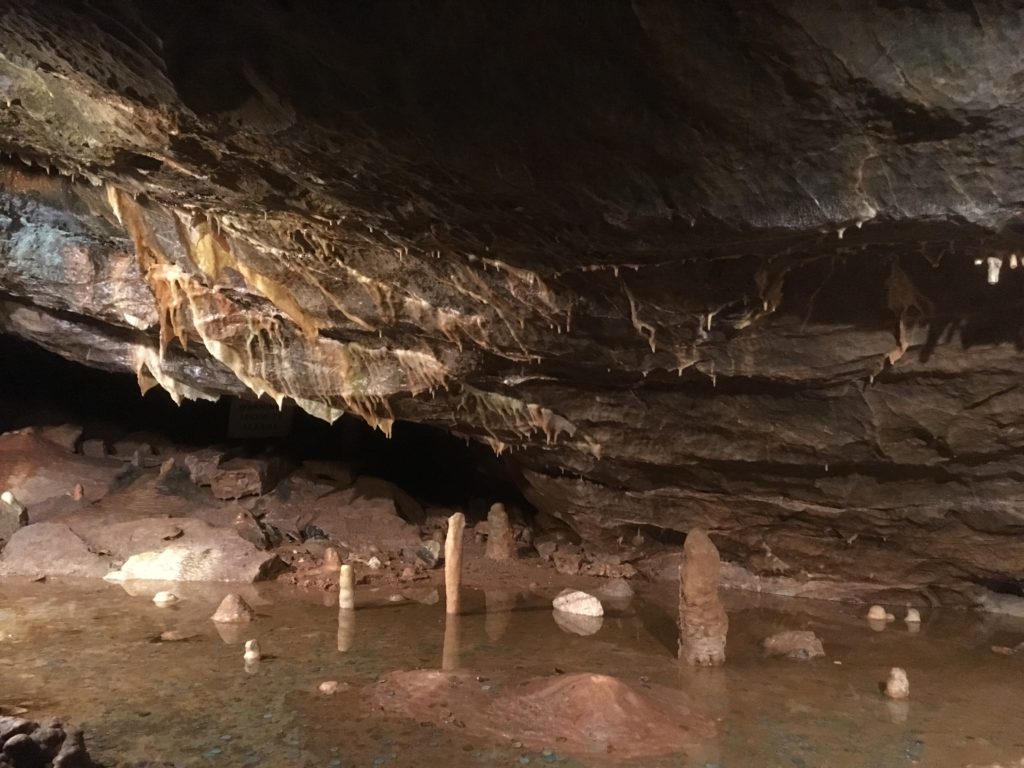 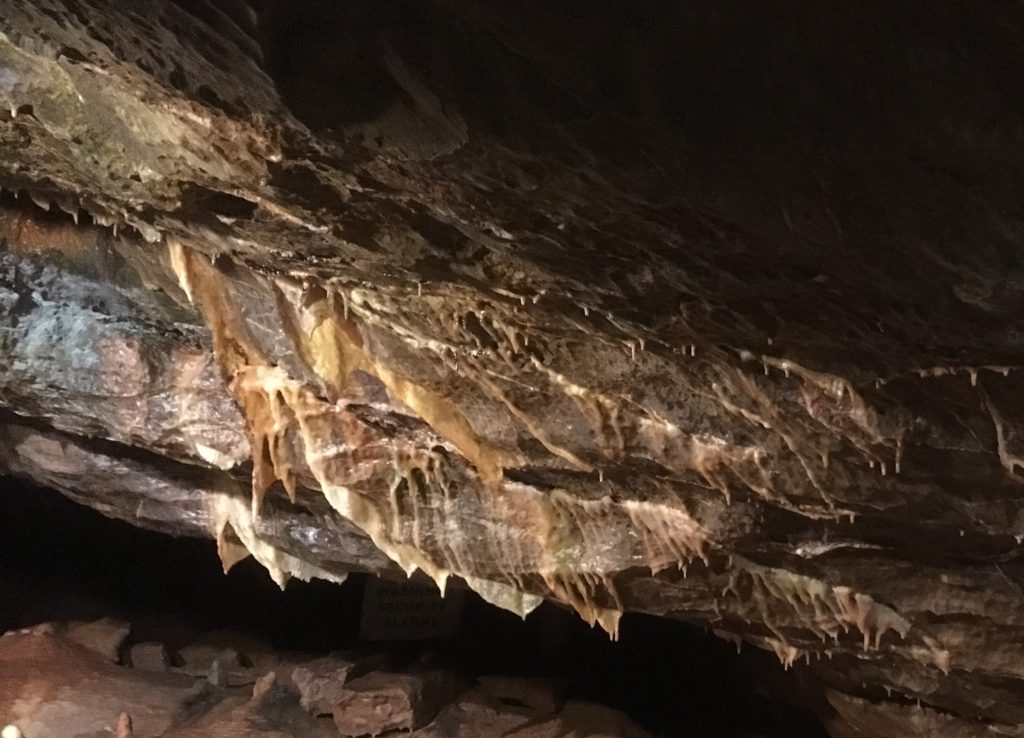 And as one turns around the corner in “St Paul’s Cathedral” another marvel awaits, the small grotto affectionately called: “Aladdin’s Cave” (see Photo 7, the only one taken by my husband with his much better-quality camera, and Photo 8, with my son looking in, for scale). This particular site seems to match Gimli’s words immediately after the extract above: 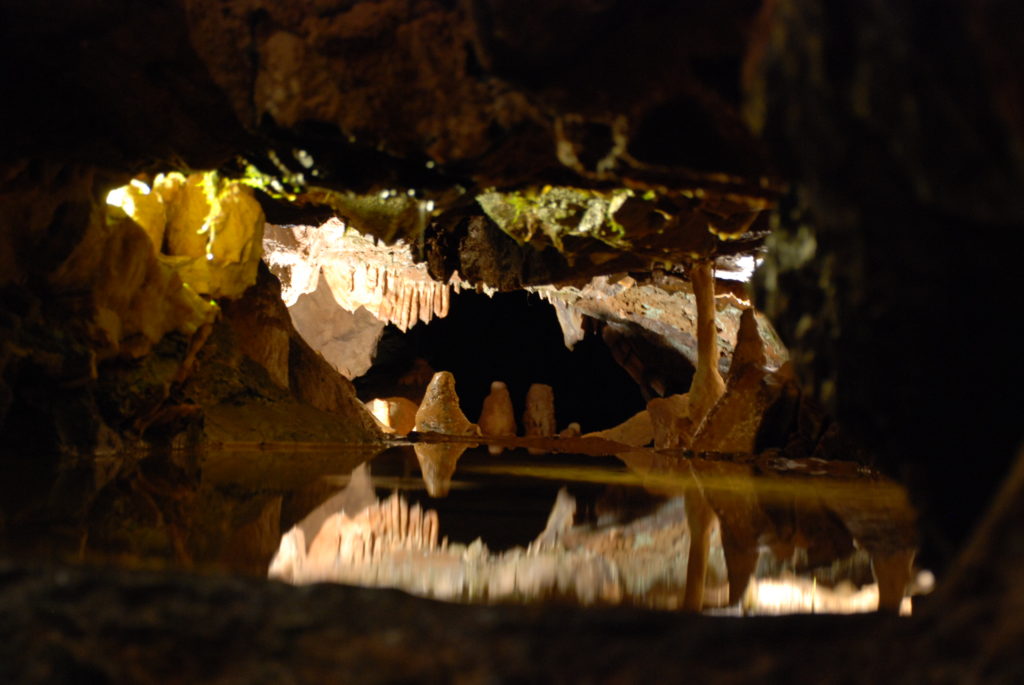 “Still lakes mirror them: a glimmering world looks up from dark pools covered with clear glass; cities, such as the mind of Durin could scarce have imagined in his sleep, stretch on through avenues and pillared courts, on into the dark recesses where no light can home. And plink! a silver drop falls, and the round wrinkles in the glass make all the towers bend and waver like weeds and corals in the grotto of the sea. Then evening comes: they fade and twinkle out; the torches pass on into another chamber and another dream.” (The Lord of the Rings, The Two Towers, Book III, “The Road to Isengard”) 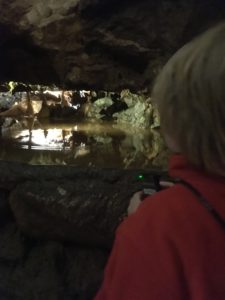 To be honest, this particular spot in Gough’s cave was, for me, the most memorable and most beautiful to look at – my family and I stayed in that chamber for a bit, looking into the grotto, and trying to capture its beauty (no photo does it justice!!!). In the few instances where there was silence (literally, only for 1-2 seconds at a time, as it was a busy weekend at Cheddar) one could just about hear the “plink” of drops falling in the pool, but seeing the ripples in the water and the distortion of the reflected rock formations was indeed very much reminiscent of Tolkien’s description. The big difference, of course, is that Aladdin’s cave is a miniature world, but Tolkien’s description literally enlarges its most spectacular qualities to an entire chamber.

I even tried a short video, in an effort to capture a better sense of the depth and complexity of “Aladdin’s cave” (but alas, no total silence so the sound is disappointing):

Further in, there are more amazing chambers and much bigger spectacular rock formations, such as the “Diamond Chamber” (Photo 9), a beautiful tree-like structure, with stalactites looking like extended roots (Photo 10) and a stalactite “waterfall” (Photo 11), but I think most of the features in Gimli’s description fit better with the chambers and features I identified further up. 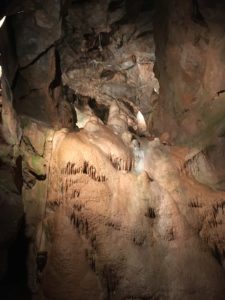 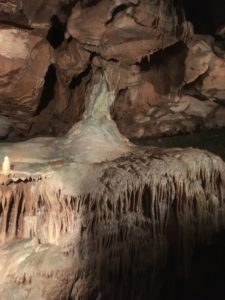 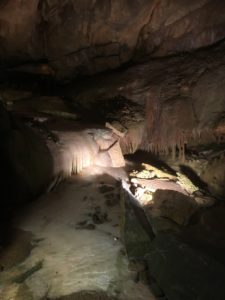 The closing of Gimli’s speech brings us back to a contemplation of the overall magnificence of the caves:

There is chamber after chamber, Legolas; hall opening out of hall, dome after dome, stairs beyond stairs; and still the winding paths lead on into the mountains’ hearth. Caves! The Caverns of Helm’s Deep! Happy was he chance that drove me there! It makes me weep to leave them!” (The Lord of the Rings, The Two Towers, Book III, “The Road to Isengard”)

There is only one visual representation of these Middle-earth caves in Tolkien art that I know of, and that’s Ted Nasmith’s wonderful “The Glittering Caves of Aglarond” (see below), picturing Gimli and Legolas visiting the caves, presumably after the events of The Lord of the Rings. As we find out in the Appendices: 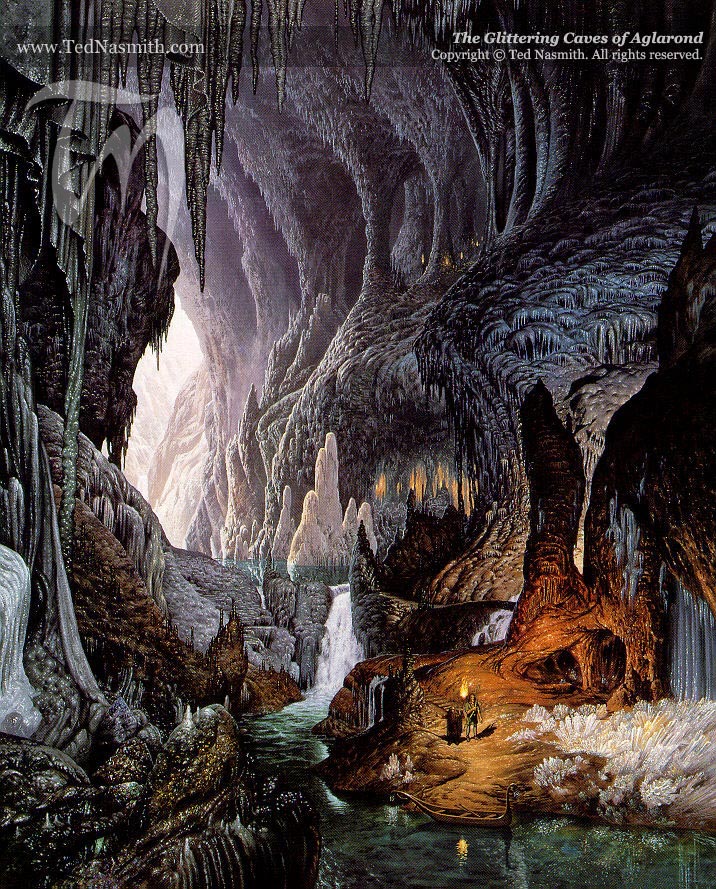 The Glittering Caves of Aglarond, by Ted Nasmith, reproduced with kind permission

After the fall of Sauron, Gimli brought south a part of the Dwarf-folk of Erebor, and he became Lord of the Glittering Caves. He and his people did great works in Gondor and Rohan. For Minas Tirith they forged gates of mithril and steel to replace those broken by the Witch-king. Legolas his friend also brought south Elves out of Greenwood, and they dwelt in Ithilien, and it became once again the fairest country in all the westlands. (The Lord of the Rings, The Return of the King, Book VI, Appendix A)

Nasmith’s illustration must be catching the moment when half of the bargain between Gimli and Legolas, struck immediately after Gimli’s lengthy eulogy of the glittering caves, is fulfilled:

‘You move me, Gimli,’ said Legolas. ‘I have never heard you speak like this before. Almost you make me regret that I have not seen these caves. Come! Let us make this bargain – if we both return safe out of the perils that await us, we will journey for a while together. You shall visit Fangorn with me, and then I will come with you to see Helm’s Deep.’
‘That would not be the way of return that I should choose,’ said Gimli. ‘But I will endure Fangorn, if I have your promise to come back to the caves and share their wonder with me.’ (The Lord of the Rings, The Two Towers, Book III, “The Road to Isengard”)