This summer, a very exciting project I have been working on for a while was launched, and I curated my first exhibition to accompany and complement it. The launch itself was an overwhelming moment, with a lot of media attention and too much excitement, so it’s only now that I can look back and reflect, and while the exhibition is still on show, that I am ready to blog about it.

Are you sitting comfortably? Here it goes! For a quick intro, click first on the video below!

A tiny reproduction of #AliceInWonderland has been created by UofG’s @Dr_Dimitra_Fimi & @darylbeggs of @cardiffuni 📚 Each page is just the width of a human hair!
More on the project 👉 https://t.co/a8PkuJ9LDd
More about our Tiny Treasures exhibition 👉 https://t.co/dOegvybfdd pic.twitter.com/IkLGSzgu10

It’s difficult to know where to start talking about this project and exhibition, but I guess I will begin at the beginning:

A couple of years ago, I met Dr Daryl Beggs, a physicist at Cardiff University, specializing in silicon photonics and photonic crystals. We were both taking part in the Welsh Crucible, a research development programme in Wales (informed by the success of the Scottish Crucible). Part of the idea was to get people from a variety of disciplines together and to get them to think outside the box. Daryl’s 5-minute presentation at the beginning of the programme mentioned the word “miniaturization” to refer to some of the work he does: trying to make microchips as small as possible to maximize efficiency – the sort of technology that has allowed our digital devices to get smaller and smaller.

But, of course, for me the word “miniaturization” meant something very different. I was thinking Victorian fairies, and doll’s houses, and miniature books, and little people under the floorboards, as in Mary Norton’s The Borrowers. I am a specialist in fantasy and children’s literature, after all!

So Daryl and I got talking and I ended up learning A LOT about microchips, and he got to hear A LOT about Victorian whimsy. And then he said: why don’t we print a tiny book, so tiny that it can’t be seen with a naked eye, not even with a standard microscope – the sort of thing the Victorians could only dream of? Now, how can you say no to that? So, with the support of the Welsh Crucible (I was then based at Cardiff Metropolitan University in Wales) we got the funding together and went for it! 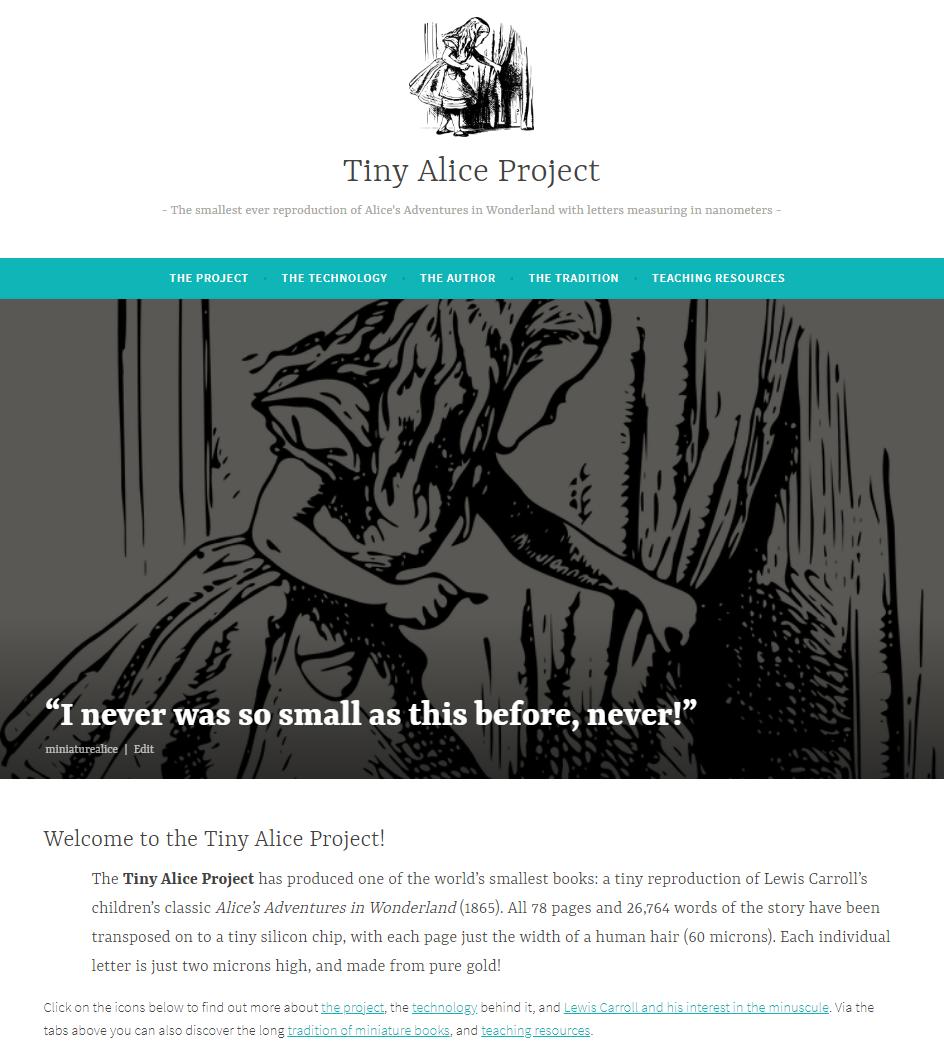 Although we considered other texts, Alice’s Adventures in Wonderland was, for me, the right text for this, not only because Alice becomes very very small (she’s even worried she’ll disappear altogether at one point) but also because Lewis Carroll (Charles Lutwidge Dodgson) is just the perfect figurehead for such a project: he was mathematician and logician (so bridging science and literature already), an amateur photographer and, generally and all-round gadget-enthusiast! He had a camera and a microscope, and on that “golden afternoon” of July 1864 when he first made up the story of Alice for Lorina, Alice, and Edith Liddell, Carroll also showed the 3 Liddell girls (through a microscope) his collection of microphotographs – a blending of microscopy and photography.

Carroll also had books on microscopy, and he was a keen collector of miniature books: he was collecting the famous Pickering Diamond Classics series. So with our Tiny Alice project we would not only be miniaturising a book that brings together science and literature very naturally, but we would also be adding to the tradition of miniature books, which goes back A LONG way!

After a period of testing, and of trying different sizes, the final version of Tiny Alice was produced at the Institute of Compound Semiconductors at Cardiff University. We put together a website for the project, explaining the technology behind it, the tradition of miniature books, and linking Tiny Alice with Lewis Carroll’s scientific and creative endeavors. Daryl and I also developed school resources and engaged with primary school pupils, introducing ideas of scale and getting them enthused about the technology behind the project, and the interplay between science and the arts.

While the project was still ongoing, I joined the University of Glasgow, and as we were getting nearer the end, and the point when we were ready to launch it, I started talking to my colleagues in Glasgow about finding a way to exhibit Tiny Alice. Bob MacLean, Assistant Librarian at Archives & Special Collections at the University of Glasgow had the best idea:  we have an excellent collection of miniature books in our archives at Glasgow – why not exhibit some of our finest examples, and Tiny Alice alongside them, within the context of the wider tradition?

So I was given the exhibition space at the foyer of Special Collections (12th floor of the University of Glasgow Library) where I put together an exhibition featuring a selection of miniature books from Glasgow’s Special Collections, including a 13th-century Bible on velum, miniature books owned by William Hunter, and my personal favourite, a tiny Bible by George Bryce, printed in Glasgow. Bryce’s miniatures are the ones mentioned as part of Arrietty’s library in Mary Norton’s The Borrowers! I’d like to thank Bob Maclean for the opportunity he gave me to curate my first exhibition, and for sharing generously his time and expertise. And many many thanks also to Elzbieta Gorska-Wiklo for the conservation work on the exhibition items and for making the exhibition look absolutely stunning! 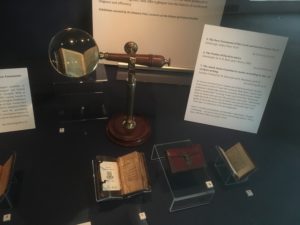 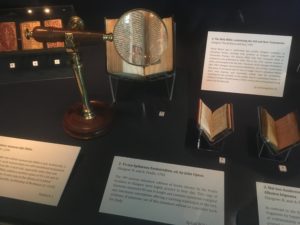 So coming back to Tiny Alice, the challenge was always going to be HOW to exhibit it!

Just to give you a sense of size: each page of Tiny Alice is 85 x 60 microns. But what is a micron (short for a micrometer)? Well, we all know more or less what 1 meter is? Now make that 1000 time smaller – that’s a milimeter (again, quite familiar – let’s say about the width of a business card). Now make THAT another 1000 smaller! As Daryl and I were telling the primary school children we visited to engage them in this project, you can’t see this, you have to IMAGINE it!

Each letter of our Tiny Alice is approximately 2 microns in height. Each page is 60 microns wide – about the same as the diameter of a human hair.

At the same time, with things so tiny you have to content with the air we live and breathe in, which is full of tiny particles we can’t see, but which can affect something as small as this. Just to give you a sense, the normal environment we live in has 5 millions particles per cubed meter. Our Tiny Alice was created in a clean room at the Institute of Compound Semiconductors at Cardiff University – a cleanroom with less than 10,000 particles per cubed meter. So that’s was the right kind of environment to exhibit it from.

Enter Dr Andy Bell and Dwayne Spiteri from the School of Physics and Astronomy here in Glasgow. Dr Bell and Dwayne very kindly gave up their time and expertise to make the public unveiling of Tiny Alice happen! During the launch event, Dwayne was sitting at the Glasgow Laboratory for Advanced Detector Development (GLADD) with Tiny Alice under a very powerful microscope, magnified a 100 times. I was able to connect with him via videoconferencing software from the Special Collections seminar room in the library, and to share with the launch attendees what he could see under the microscope! We begun with showing just one of the pages of Tiny Alice and I read just a little extract from it – appositely, a passage towards the end of chapter 1, in which Alice thinks that she must be “shutting up like a telescope”! 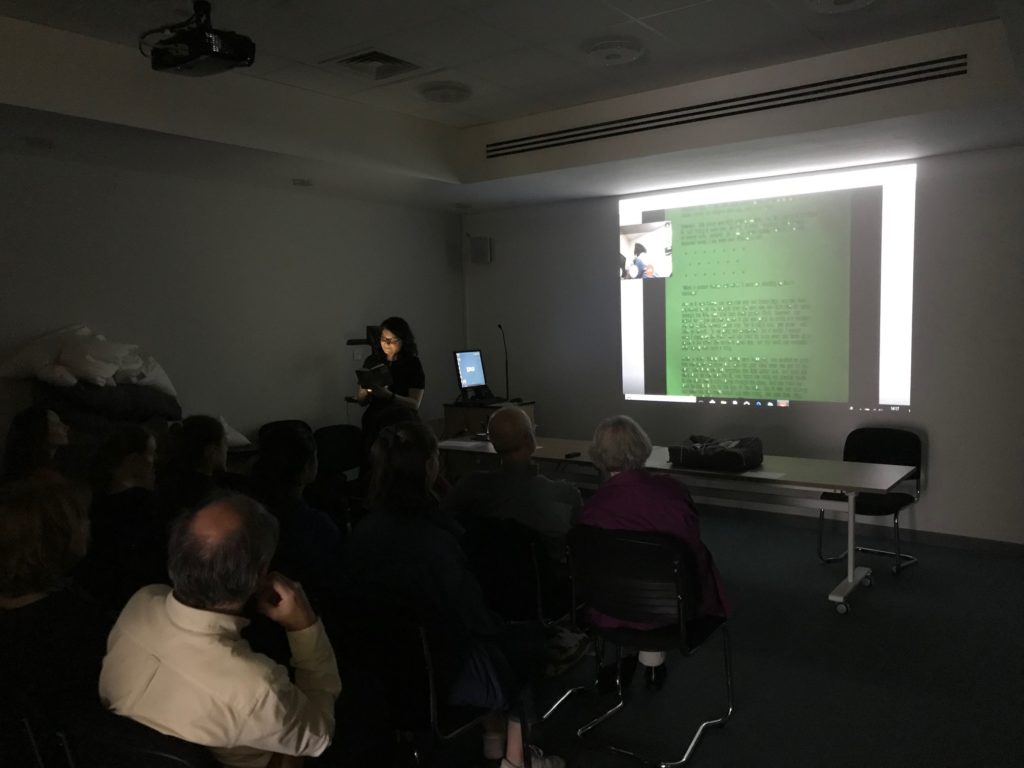 ‘What a curious feeling!’ said Alice; ‘I must be shutting up like a telescope.’

And so it was indeed: she was now only ten inches high, and her face brightened up at the thought that she was now the right size for going through the little door into that lovely garden. First, however, she waited for a few minutes to see if she was going to shrink any further: she felt a little nervous about this; ‘for it might end, you know,’ said Alice to herself, ‘in my going out altogether, like a candle. I wonder what I should be like then?’ And she tried to fancy what the flame of a candle is like after the candle is blown out, for she could not remember ever having seen such a thing.

After that, Dwayne changed the magnification a few times, so that the attendees could see more pages from Tiny Alice on the screen, including the famous one in which Lewis Carroll plays with typography: the mouse’s tale, presented on the page as a mouse’s tail! 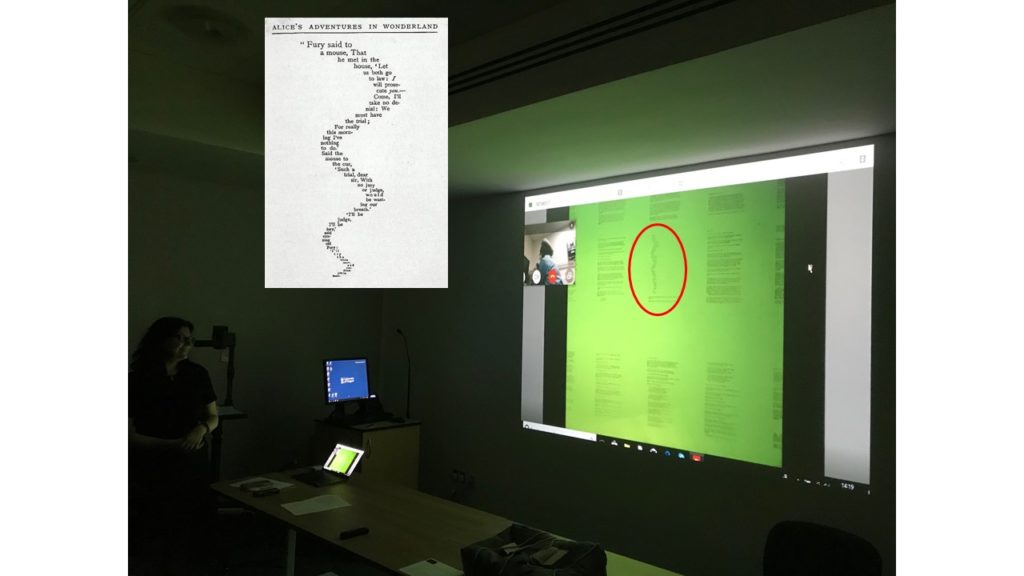 That morning I had spent a good hour in the cleanroom with Dwayne setting up Tiny Alice, locating the actual reproduction of the text on the microchip (it was, literally, looking for a needle in a haystack!!!), and finding the exact page I needed for the launch!

The project attracted a lot of media attention, including an article in The Daily Telegraph, The Scotsman, and STV. Early on the morning of the launch, I also gave a quick interview about it to Gary Robertson for Good Morning Scotland. You can listen to the interview here: 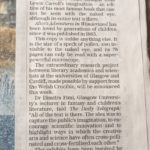 Article about Tiny Alice in The Daily Telegraph 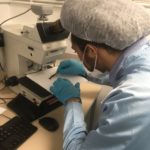 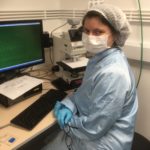 Me, checking the text of Tiny Alice under the microscope!

The exhibition I curated is titled: “Tiny Treasures: Miniature Books from Scotland and Beyond”. It is still on show at the foyer of Special Collections on level 12 of the University of Glasgow Library. Find out more about it here: https://www.gla.ac.uk/myglasgow/specialcollections/currentlyonexhibition/

The Exhibition items and my curatorial notes can be found on the UofG Special Collections flickr here: https://www.flickr.com/photos/uofglibrary/albums/72157711635673226/