Last month I had a new journal article published in the Open Access Journal of Tolkien Research:

The article was an outgrowth of the research I did for A Secret Vice: Tolkien on Invented Languages, co-edited with Andrew Higgins.

One the one hand, I have always wondered about one of Tolkien’s rather pointed remarks when referring to International Auxiliary Languages:

At present I think we should be likely to get an inhumane language without any cooks at all – their place being taken by nutrition experts and dehydrators. (A Secret Vice, p. 5, italics added)

Who were these “nutrition experts and dehydrators”? My article offers a potential answer to this question, by tracing the history of language invention, and the idea of sound symbolism, and then placing Tolkien’s comment within the exact historical and intellectual moment of the delivery of “A Secret Vice”.

On the other hand, Tolkien’s manuscripts edited and presented in A Secret Vice revealed unexpected links with Modernist and avant-garde movements of the time, including James Joyce and Gertrude Stein. The article traces the remarkable parallels between Tolkien’s theorizing of imaginary languages and the radical linguistic ideas of Modernist and other avant-garde writers of the early 20th century (not only Joyce and Stein, but also the zaum and Dada poets). The article shows that, despite political and ideological differences, Tolkien and experimental writers engaged with current linguistic research and came to similar aesthetic and imaginative responses.

As an overarching argument, the article claims that at the heart of Tolkien’s exploration in “A Secret Vice” (and its accompanying papers) is the question of language as communication vs. language as art. It argues that Tolkien’s language invention navigates the (perceived) binary between a utilitarian aim for language invention (contemporary International Auxiliary Languages) vs. an aesthetic linguistic pursuit (contemporary Modernist and other avant-garde linguistic experimentation), by choosing a third (middle) way. 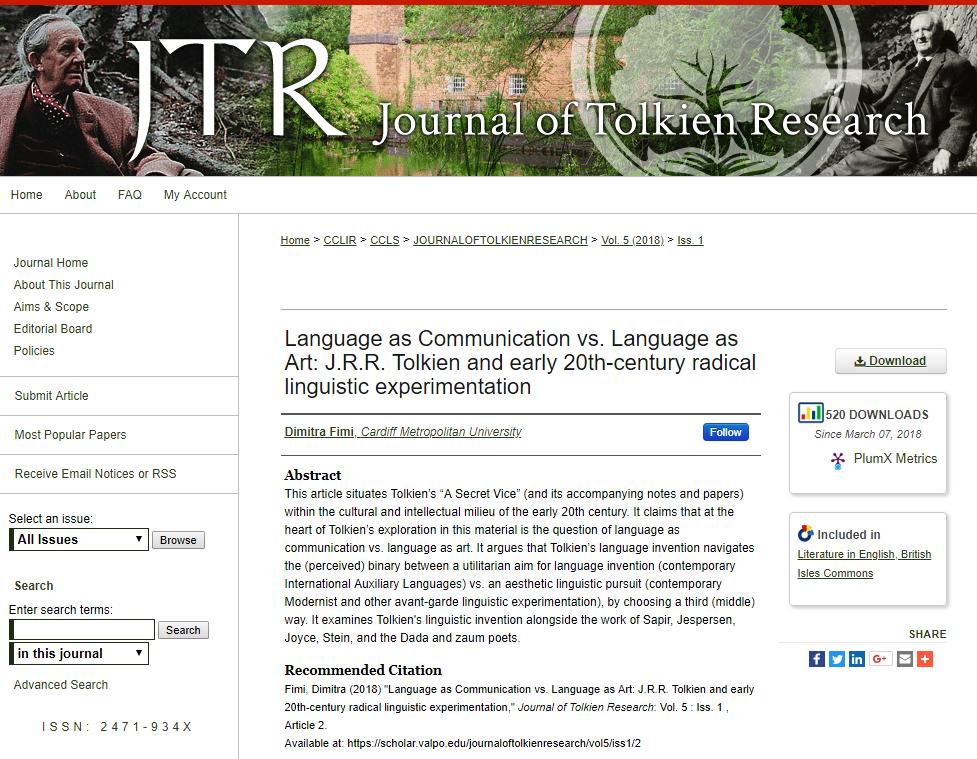