One of the books I’ve worked with very closely during the last few years is Alan Garner’s The Owl Service. Garner’s creative re-use of the tale of Lleu, Blodeuwedd, and Gronw from the Welsh Mabinogion made it a prime candidate for inclusion in my recently published monograph, Celtic Myth in Contemporary Children’s Fantasy (Palgrave Macmillan, 2017). In Chapter 5, I explore the way in which Garner creatively reshaped and appropriated this Welsh legend, and I argue that he created a “prototype text” in which the supernatural erupts into the mundane and intrudes into family and/or romantic relationships of teenagers. Books such as Jenny Nimmo’s The Chestnut Soldier and Catherine Fisher’s Darkhenge has followed this tradition, using Welsh myth as a way of dealing with psychological traumas, internal anxieties, and the perennial problems that often concern teenagers
(romance, sexuality, intergenerational and sibling conflict, etc.).

Having been published in 1967, I knew that the book was going to be 50-years-old at some point this year, so I got in touch with HarperCollins to find out the exact date. Thanks to their archivist, Dawn Sinclair, I now know that The Owl Service was published on 21st August 1967, so it celebrates its 50th anniversary today. Dawn very kindly tracked for me the relevant page in the Collins Complete Book Catalogue, Autumn 1967: 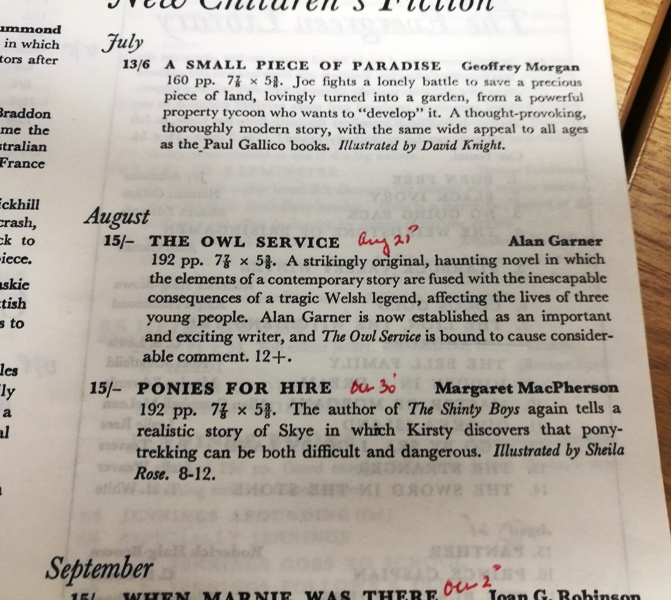 To mark the 50th anniversary of The Owl Service, I contributed this article to the Times Literary Supplement (TLS) online today: https://www.the-tls.co.uk/articles/public/alan-garner-owl-service-fifty/

I look forward to teaching the book again this year and to sharing its haunting qualities with my students.