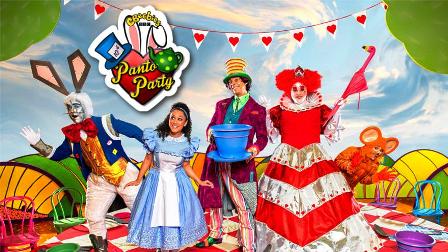 Having a nearly three-year-old means that I’m always attuned to what’s new on CBeebies and, naturally, there’s a lot of bespoke Christmas entertainment this time of the year, including the ever-popular Christmas panto. Last year it was Peter Pan, the year before it was A Christmas Carol, while this year, so appositely on the 150th anniversary of Lewis Carrol’s celebrated children’s classic, it was Alice in Wonderland.

Of course, these pantos are adapted for the target audience of CBeebies, i.e. toddlers and very young children under 6, so one expects a simplified storyline, and favourite CBeebies presenters and characters to make an appearance (I suppose the episodic nature of Carroll’s narrative helped a lot with the latter). So this year the very talented Cat Sandion was a refreshingly non-blonde and rosy-cheeked Alice, CBeebies favourite Andy Day impersonated the iconic Mad Hatter, while Justin Fletcher – justly dubbed “CBeebies royalty” – was a hilarious Queen of Hearts. There were other great casting choices including the “naughty pirates” trio from Swashbuckle, Captain Sinker, Cook and Line, now transformed into the Duchess, Cook (naturally) and a hilariously oversized Baby.

What was very different from Lewis Carroll’s Alice was the emphasis of this panto on imagination and make-believe. The first scene presented Alice and her entire family (not just her older sister as in the book) having a picnic by the riverside. Alice, dressed in the recognisable blue pinafore dress popularised by the Disney adaptation, declares that: “I don’t have any imagination… I can’t make-believe at all…” Her family endeavour to convince her otherwise, pointing to possible mundane things that can become magical in their opening song: the rabbits in the field, the father’s pack of cards, or a caterpillar (of course prefiguring some of the best-known scenes in the book). And sure enough, the white rabbit appears, prompting Alice to follow him down the rabbit hole.

Alice becomes huge and then very small via some clever stage magic, meets the caterpillar (very nicely played by the newest CBeebies presenter Ben Faulks) and the Duchess and co., talks to the Cheshire Cat (again, very clever staging here!) and plays a variation of “musical chairs” with the Mad Hatter, the Hare and the Doormouse. And it’s at that point that she suddenly realises that she can create things by just imagining them (though I have to say that the make-believe food at the party reminded me more of Peter Pan than Alice). By the time she reaches the Queen’s party she can imagine and create a lifetime’s supply of jam tarts to save her family from the Queen’s wrath. So instead of having a vivid dream that can be sometimes weird, somewhat disturbing and definitely a little scary at times, this Alice and her family create and navigate their own Wonderland, which makes this narrative more of a journey towards appreciating the power of imagination as the proper domain of children (a staple characteristic of the ‘Romantic child’ still with us today) than a journey into the unconscious or towards maturity, as Carroll’s text has been often read. Perhaps this is the result of the educational role of CBeebies: tellingly, the producer, Jon Hancock, noted that:

there’s also a beautiful message we’re bringing out of the story that I hope will inspire parents and children – to have fun with your imagination, and for parents to really invest and partake in imaginary play with their children.

The panto did invite some audience interaction – as one would expect – by having children wear rabbit ears, and “explained away” or eliminated some of the most disturbing elements of the book (the scene that used to scare me as a child was the Duchess’s baby turning into a piglet but here the baby just wears a pig’s snout and says that he has “dressed up” for the party).

Overall this panto was completely within the tradition of previous CBeebies shows, full of colour, catchy songs (I’m still humming “Use your imagination…”) and excellent staging (it was recorded at the Wales Millennium Centre at Cardiff Bay). It managed to incorporate CBeebies characters, showcase the talented CBeebies presenters and introduce young children to a story they will read and watch many times in the future in numerous adaptations. Yes, perhaps the main theme of the story was altered to suit the needs of the CBeebies agenda, but that’s what adaptation is all about: “repetition with variation”, as Linda Hutcheon has shown.